The International Joint Investigation Team (JIT) stated on May 24 that it was a Russian Buk missile that shot down Boeing 777 of Malaysia Airlines in July 2014 over Ukraine. The accusation was based on photos and videos that people had uploaded on social media shortly after the disaster. In other words, the statement from the JIT is nothing but another portion of groundless accusations to demonise Russia in the face of the world. 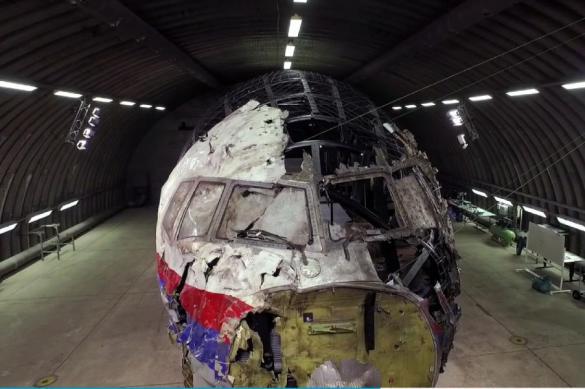 The conclusion made by JIT experts is not the first one of the kind. In 2016, there was an "interim report," when it was said that the commission would not provide all the materials of the caae because it could harm the investigation. In addition, it is not the first time, when foreign investigators accuse Russia of downing Flight MH17 aircraft without providing any facts at all.
Experts have serious doubts about the quality of the work of the investigating team and ask questions about the real goal of that work.

Here is a comment on the subject that we received from Honoured Pilot of the USSR, Oleg Smirnov.

"This version is not the first, but just the next one in the absolutely mediocre and unprofessional investigation into the causes of the grave tragedy. This is part of the information warfare against Russia, because it lasts for three years already and there is a great deal of gross violations of international aviation regulations in this investigation.

"On the second day after the tragedy, I compared the facts that had emerged by that time, and they made me believe that the country that shot the Boeing down was Ukraine. Contrary to strict requirements to close airspace for the flight of civil aircraft over the territory where military actions were taking place, Ukraine ignored that international regulation. Ukraine actually allowed the Malaysian Airlines Boeing to fly over war zone.

"The co-author of this disaster is the Dutch government, which did not find either strength or desire to save the lives of its citizens who were flying on that plane. The Dutch authorities did not demand Ukraine to comply with international aviation regulations. Therefore, the Dutch government pushed those people into that aircraft.

"Interestingly, Russia also conducted its investigation into the MH17 disaster, but the JIT ignored the conclusion of the Russian side. In particular, it goes about the fact that there was an unexploded Buk missile found on the site of the tragedy. The missile hardly had any damage on it. The plane was shot down, but then there was a whole missile found on the site. How can this be possible?

"The Russian company Almaz-Antey, the maker of Buk missile systems, conducted an experimental launch of the missile under similar conditions. Of course, the missile was torn into pieces. However, the international commission ignored those findings. It is also curious that JIT experts talk about the Buk missile and accuse Russia of the disaster, simply on the basis of something that they found on the Internet. Yet, Dutch prosecutors say that they do not know yet who shot the Boeing down. However, it still remains questionable whether it was a Buk missile that shot down Flight MH17.

"As JIT representatives said during their press conference, they had a whole range of photos and video materials, on which the Buk anti-aircraft system was seen. During the analysis of those images, the experts found a number of distinctive features. The combination of those features was so unique that they could be considered as "fingerprints", the investigators explained. Allegedly, the only Buk missile system, on which such a unique combination of distinctive features was found, was the self-propelled Buk SAM, which was repeatedly captured on photo and video materials as the system was traveling in a column of the 53rd brigade on June 23-25, 2014.

"In addition, there is no certainty that the fragments of the nozzle and the engine of the Buk anti-aircraft missile that were presented to the public during the press conference on May 24 were actually the fragments of the missile that shot down MH17. It is worthy of note that missiles of this type were withdrawn from the Russian armed forces in 2011, but JIT investigators did not comment on the matter.

"To crown it all, the international commission decided to make the statement now for political purposes, during the first day of the international economic forum in St. Petersburg, where, contrary to all the rhetoric about "Russia's isolation", delegates from 72 countries of the world are present.

"Therefore, all these announcements come as an attempt to "refresh the topic," and demonise Russia further. The very phrase "based on data from social networks"makes one only snort a laugh. The prosecutors in charge of the case clearly distance themselves from making such ridiculous accusations.

"In a nutshell, this endless investigation will last for many more years. The JIT will continue presenting "revealing reports" every time when it is politically advantageous. However, every new report from this group of investigators already starts producing the opposite effect discrediting their work entirely."

Malaysian Boeing could be downed by Ukrainian fighter jets
19:40
Putin answers question about further mobilisation in Russia
16:32
Putin meets mothers of Russian servicemen who take part in special operation in Ukraine
15:26
Crimean governor denies reports about Iranian instructors killed in Crimea
14:12
Zelensky continues talking rubbish instead of peace
19:52
Patriot air defense systems in Ukraine will be powerless against Russian missiles
18:08
Zelensky plans to mobilise all Russian-speaking people to get rid of them on battlefield
16:55
Moscow responds to Emmanuel Macron's criticism of Ukraine missile strikes
15:51
Zelensky and the West make Ukrainian people experience hardest winter of all times
14:27
Russia passes new law banning LGBT propaganda in nearly all spheres of social life
19:54
Mountain skier survives as avalanche carries him down the mountain
US skinhead mercenary admits Russia had good reason to launch special operation