Ukraine torn between East and West

The Ukrainian government has suspended the preparation for signing the Association Agreement between Ukraine and the EU. President Yanukovych has apparently realized where he is being pushed by the West. In addition, it is difficult to sign an agreement with someone who makes you dig your own grave with your own hands. Yet, Ukraine will have to make a choice, and the fight for this country will only exacerbate. 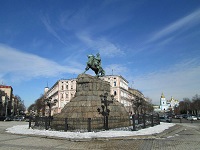 The government's decision can be explained by three factors. The first one is economic and is actually cited by Kiev when justifying the decision. Ukraine decided that the integration with the EU would require $165 billion, while the EU has offered $800 million, said in a live video feed of Pravda.Ru the director of the Institute of CIS countries Konstantin Zatulin.

The choice was made "in favor of integration with the countries of the CIS." The fact that some sort of "peace" was established between Russia and Ukraine became clear after the Naftogaz has resumed the purchase of Russian gas on November 15, initially refusing it on November 11. Gas issues in the Russian- Ukrainian relations are closely linked with politics. Zatulin said that progress has been made because mutual guarantees have been provided. On the one hand, there was a guarantee that Ukraine would sign an agreement with the EU, and on the other that Russia would revise the gas contract. Zatulin said that President Viktor Yanukovych saw that "Ukraine was led towards an abyss." He likely had a talk with someone who had numbers in their hands, and the rhetoric and intentions have changed dramatically.

The second reason has to do with the requirement of the West to release Yulia Tymoshenko. Zatulin explained that one can hardly see the hard hand of Moscow in Tymoshenko's case. She once lied to the Russian Ministry of Defense, and a Russian general Georgy Oleinik was convicted of embezzling because the corporation headed by Tymoshenko has not paid the Russian Ministry of Defense under the intergovernmental agreement.

Then, former Ukrainian Prime Minister Pavlo Lazarenko convicted of money laundering was just released from prison in the U.S. Tymoshenko headed the United Energy Systems of Ukraine under his government. "It is hard to imagine that Lazarenko convicted in the U.S. for stealing money was acting over her head, that is, they were stealing not only from Ukraine but also from Russia," said Zatulin. "During the campaign, Tymoshenko loved to kneel in front of the audience and say: "Yes, we were stealing, but from the Russians." As it turned out, not only from the Russians.

Twisting Ukraine's arms "in relation to this not very nice character," the West is grossly interfering in the internal matters. Furthermore, negotiating with Yanukovych, the West sees Tymoshenko in the presidential chair, and not him. Yanukovych understands that Tymoshenko, once released, will show up in Ukraine in 2015 with a high chance of success, as an innocent victim.

Hence the recent decision on Yulia Tymoshenko. The President refused to pardon her, and the Parliament has blocked adoption of a law allowing her to travel abroad for treatment. Zatulin said that she has every chance to be elected. He explained that in Ukraine there are two types of voters. To the east there is a protest vote that will vote for the "innocent victim" and the western one that wants to be closer to the West and its riches. Fulfilling the requirements of the West, Yanukovych would get in the unenviable position with the possible prospect of imprisonment.

The third set of questions is related to the position of the regions. "The Party of Regions" is listening to what regions have to say," said Zatulin. The regions say: "We are being buried; we feel that Russian investors and businesses refuse to renew the contracts." For example, Sevastopol City Council decided to withdraw its deputies from the Parliament when Ukraine signs the Association Agreement. Why exacerbate separatism if there is a centuries-old experience of "multi-vector" policy accumulated since the time of Bogdan Khmelnitsky?

Perhaps, in this context, President Vladimir Putin proposed a feasible solution. Russia is ready to participate in tripartite negotiations with Ukraine and the EU, he said, but they have to take place even before the establishment of the associated relations between Kyiv and the European Union. "We can do it, but only before decision-making. How can we negotiate on the issues that have already been agreed upon? What is our role in these negotiations? It is null, but we are certainly ready for this discussion if it is specific," Putin said at a literary meeting in Moscow on Thursday. In addition, Putin said that Russia was not against Ukraine signing the association agreement with the EU. It is a wise position, and now Yanukovych may reference it in his conversations with European officials.

What does Europe think? Special Envoy of the European Parliament in Ukraine Alexander Kwasniewski was surprised by the news that came from Ukraine. Kwasniewski said that after this Ukraine had no chance of getting close with Europe in the next few years. 2014 is election year in Europe, it is also a presidential election year, and during election campaigns and changes in the power of the EU the return to the negotiating table is not a good idea, said the former President of Poland. He is confident that Yanukovych has made this decision solely due to political, rather than economic reasons. Many Russian experts agree with him.

Where will Ukraine move and is the new Maidan possible? The most realistic option is that Ukraine will continue to sit on two chairs. Judging by Putin's words, he agreed to work with this option. This is beneficial for Russia. "Russia needs a pause to ensure that Russia-oriented people emerge in the EU. Russia needs a modern political force, communists will not be good for it," Zatulin argued. Russian needs to include Ukraine in its orbit, help it, and not just fight with it at the price market.

Here we must clearly understand that the West looks at the Slavs as uncivilized world that does not respect the principles of democracy and its values. "We must unite and send a clear message that we demand respect. We are ready to cooperate, but on equal terms. The current Ukrainian elite is more concerned with saving its face; many of them are ready to run to the EU on any conditions because they fear of being swallowed by Russia, Russian oligarchs, and don't care what will happen to the economy and the people," concluded Zatulin.

"Ukraine will have to make a choice," told Pravda.Ru Alexander Tevdoy-Burmuli, Associate Professor of Moscow State Institute of European integration. "The longer it thinks, the larger price it will have to pay for joining the EU and for entry into the CU. It runs the risk of losing the trust of both sides. Regardless of the pressure on Yanukovych, and he is pressured from both sides, the decision is his, and no one should be blamed."

Andriy Shevchenko, an MP from the "Fatherland" party, the first deputy chairman of the parliamentary committee on human rights is also dissatisfied with the profit-seeking behavior of the Ukrainian President. "Yanukovych negotiated with Moscow and Brussels, and this 180-degree turn came as a shock for many Ukrainians. Kremlin drank champagne yesterday, but I think that Yanukovych will continue to negotiate, fluctuate, and this does not make him better respected by either side," said Andrei Shevchenko. He also believes that the society in which 60 percent were in favor of the union with Europe and only 30 favored the union with the Customs Union will protest. "They started in many cities, and the most ambitious are set for November 24." Will these actions turn into a new Maidan?

"I think that the protests will be strong, and the closer to the Vilnius summit, the stronger. But Yanukovych hopes that the situation could be kept under control," Alexey Vlasov, the director of the Information and Analytical Center for the Study of the post-Soviet space MSU - RSUH told Pravda.Ru. Alexander Tevdoy-Burmuli has a different opinion: "I do not think that there will be another Maidan a la the old days. It will be more of a symbolic protest that must show the West that the opposition and the Ukrainian part of the public are against the Yanukovich's decision. Maidan should be done if you are really taking power. And who is able to do this in Ukraine now? Yatseniuk? It's a big question. But no matter who comes to power, they will have to deal with the same difficult issue," said the expert. We will add that there are many examples in the history when "hawks" became "doves" once in power.