Syria: What are the true intentions of the United States? 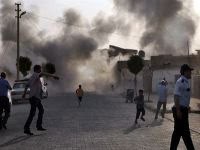 Every observer was interested in the behavior of the United States when their true intentions towards Syria would be uncovered with a series of contradictory statements.

I. On the one hand, they force the continuation of terrorist operations while at the same time preventing dialogue with the legitimate authorities of the country in which they wish to radically change personalities and policy guidelines. This is why they have worked for:

1) Hurriedly replacing the "Board of Istanbul" (or CNS) by an alleged "Coalition of the Syrian opposition," cooked up by Washington and clearly dominated by the Muslim Brotherhood in all its ranks.

2) Formalize this newly created Coalition as "legitimate representatives" of the Syrian people working for their recognition by allied countries, which now is something done, after the meeting of the "enemies of Syria" in Marrakech.

3) Form a "High Military Council" to maintain a stranglehold on the destabilizing operations, doing well there, tipping the balance toward the Muslim Brotherhood by excluding two categories of irregular combatants: the first designated as "terrorists dependent on Al Qaida," the second consists of "those who mistrust the Muslim Brotherhood and refuse the idea of ​​its rule over Syria."

4) Going back on their public decision not to arm the opposition groups, also publicly finance them and arm them directly from the U.S. and Europe.

5) Multiply the meetings of the so-called "Friends of the Syrian people," the famous political forum bringing together all those who consented to march with the U.S. to demolish Syria and install there a puppet government under the boots of the West, itself subservient to the U.S.

6) Install Patriot missiles on the Syrian border, intended to mean that only a military solution is retained and that NATO is finally about to intervene.

7) Encourage armed groups to intensify their terrorist operations on the ground and get the opposition against the Syrian authorities more radicalized.

II. Moreover, they imply that they are now ready to face a political solution that does not alienate any of the protagonists, including the legitimate authorities of the country under the aegis of President Al-Assad, and that they were unable to disqualify them despite two years of provocations, maneuvers and assaults. And lo, the alleged parties to peaceful negotiations among which we note:

1) The last meeting took place on the 9th of December in Geneva between the Deputy Foreign Minister of Russia, Mikhail Bogdanov, the U.S. Assistant Secretary of State William Burns, and the Special Representative of the United Nations and the Arab League to Syria Lakhdar Brahimi, which ended with a statement of the latter stating "that a political solution to the crisis is still possible and it will be based on the Geneva Agreement of the 30th of June last."

2) The commitment made for Russian and American experts to work in the pursuit of operational modalities for a peaceful settlement.

3) The distinction of armed groups operating in Syria between "terrorists" that the U.S. would not  guarantee and "opponents" that they would support, followed by the December 11 decision to register the group "al-Jabhat Nusra," having proven their "devastating leadership," on the list of international terrorist organizations.

4) Reducing the level of the representativeness of the state - the Americans in the fourth meeting of the "enemies of Syria," on the 12th of December in Marrakesh, even the absence of Hillary Clinton.

5) The apparent laxity in the installation of Patriot missiles, which will finally be positioned a short distance from the Syrian border.

6) The decrease in the untruths and lying allegations of resorting to using chemical weapons allegedly by the Syrian authorities, for lack of conclusive evidence in favor of such an intention.

7) Warranty reiterated that neither the U.S. nor the West in general, had taken the decision for military intervention in Syria.

III. These contradictions, have continued to arouse the indignation of the Russian Foreign Minister, Sergei Lavrov, as he said when they recognized the "Coalition of the Syrian opposition" as the legitimate representative of the Syrian people [Obama's statement on the eve of the Marrakesh Conference at a BBC interview] and invited his newly elected president to appear in Washington, raises the question of what are their true intentions, or rather, what are the means that they might still use to achieve their end. To answer these questions, it is necessary to recall the fundamental data set after 21 months of unrelenting aggression against the Syrian state and the people:

1) The incompetence of the United States and its allies to overthrow the Syrian government, made almost impossible, without direct military intervention or the continuation of the indirect, covert war brought in and waged by armed terrorists, funded and trained by forces they are using to subjugate the Syrian nation.

2) The depletion of Syrian targets to destroy, now that the infernal U.S. machine killed and destroyed everything that it could reach, such as economic and social infrastructures, which some escaped being immolated and are relatively out of reach.

3) The militancy, unity, discipline and tenacity of the Syrian army, are able to pursue their defensive combat and prevent armed groups from maintaining their allegedly seized positions.

4) The rejection of the insurgents and terrorists by the Syrian people, they obtain weapons for their offensive against the  land from "foreigners," additionally they are foreigners in large part, for that reason it makes it difficult, if not impossible, to maintain these armed groups in regions momentarily occupied or to be occupied.

IV. From all the above, we can understand and imagine the U.S. position on the so-called "Syrian crisis," a position reasoned on the following elements:

1) The belief that the Syrian government will remain in their position despite whatever criminal intensification is carried out by the west of  "a killing machine," and that further armed action only leads to more death and destruction without changing anything in the political and strategic results.

2) The lack of assurance as to the future maintenance of the current anti-Syrian alliance, especially if the fire spreads to a region largely corresponding to their areas of influence, beginning with the Gulf countries and Turkey. Did not Prince Talal bin Sultan declare that Saudi Arabia would be the next victim of the "alleged Arab Spring"? And did not Davudoglou not say  the in Marrakesh Conference, that the Syrian situation is a threat to neighboring countries?

Consequently, U.S. leaders should have understood well what they could get by negotiating today, largely to postpone this!

3) The need to continue working with the Muslim Brotherhood as preferred allies, wrapped in Islamic flags and subject to their diktats.

This is why we do not see contradictions in the behavior of the United States, but rather a certain complementarity that would allow them to lay the foundations for a satisfactory solution momentarily, since now they are condemned to negotiate.

A success would put into place a new power, allowing the Muslim Brotherhood to hold key posts, but it is hardly feasible that a majority of the Syrian people would allow them to monopolize it through the ballot box.

Thus, having the right of veto, the U.S. could at least turn off future decisions that went against its interests. Hence the usefulness of their "Coalition" ... At least by sharing power no one can dominate exclusively!

Consequently, we say simply that a "negotiated solution" desired by the leaders of the U.S. is not taking into account the wishes of a large majority of the Syrian people, with their sacrosanct concept of democracy, a solution that would ensure the Muslim Brotherhood's power to make decisions, even if the polls decide otherwise.

To get there, the U.S. is not about to abandon political pressure or criminal military operations within and this seems to have been fixed until next spring without any revision!

[*] Lebanese political analyst, expert in military strategy and brigadier general in the reserves.