Obama and Romney agreed on the departure of Syrian President

In the final televised debate between the two candidates for president of the United States, both agreed to work to achieve the ouster of Bashar Al Assad of Syria. Romney said he would give heavy weapons to rebels, while Obama said that would be an exaggeration. The U.S. president said his country would continue to support the opposition in Syria.

On Monday, presidential candidates Barack Obama and Mitt Romney staged their last debate, focused on foreign policy and defense, before the presidential election on Tuesday, the 6th of November.

At a political meeting held at Lynn University in Boca Raton (in the state of Florida, southeast), both Obama and Romney agreed with the need to work to achieve the ouster of Syria's president, Bashar Al Assad, and to start rapprochement with the Middle Eastern country.

The current U.S. president said his country would continue to "support" the opposition in Syria, but criticized his opponent's proposal to deliver "heavy weapons" to the rebels because, he said, they could be used "against us."

"We cannot put heavy weapons in the hands of people who could use them against us," Obama said in the third and final presidential debate against Republican rival Mitt Romney.

For his part, Romney explained that the "ousting of Al Assad is critical" and for that "we must put weapons in the right hands to defend themselves." Therefore he did not consider it necessary for the United States to intervene in that country, considering that this is a job that America's allies can do.

"I'm not going to have a military intervention in Syria, there is no need to mobilize troops with allied forces in the region," he said.

"Syria is an ally of Iran and putting another government in place will be an opportunity for change in the region," said Romney.

Iran in the debate

Romney said that "the Obama administration has not been strong enough about the situation in Iran or other countries like Cuba."

With regard to Iran, he said that although he does not intend an intervention against the country, he "will not hesitate to boycott by limiting Iranian oil exports or by imposing sanctions."

Obama defended himself and said that "the U.S. cannot unilaterally impose sanctions because they wouldn't have strength, they need the support of other countries."

He indicated that during his administration they have imposed the most "stifling" sanctions in history.

The current U.S. president said that "while I am the President of the United States, Iran will not have nuclear weapons. We cannot allow this in the most volatile region of the world," he said.

The Republican candidate, Mitt Romney, said that to promote world peace and provide an example, "the U.S. needs a solid economy which right now is lacking"

Thus, the presidential candidates of the first world power led the debate to the economic reality of the country.

While Obama said the current military spending of the United States is "10 countries together," Romney felt the need to "strengthen our Air Force to ensure the safety of citizens."

In this sense, Barack Obama has been criticized calling for making cuts "but there is overspending for the military that is not necessary."

Mitt Romney said that with possible cuts to the health program and Medicare, that is the flag of Obama administration, it will be possible to extend budget money to the military area.

"There are things we cannot afford in this country economically, for example  Medicare. We will make it much more efficient," added the Republican.

Within hours of the debate, a poll by NBC / Wall Street Journal showed that both Barack Obama and Mitt Romney received 47 percent of the intended votes among people ready to vote.

Another poll, Politico / GWU, gives advantage to the Republican: 49 percent versus 47 percent for the Democratic candidate for reelection.

Ed.  After hearing what Romney has to say, anyone that votes for him is either a part of the problem (entitled 1% elite), or totally insane. 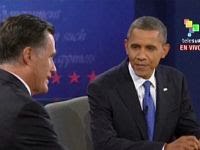