Words of Truth Leave US Troops in Afghanistan Without Commander

The NATO Commander in Afghanistan, General Stanley McChrystal, sent in his resignation. It became a sudden, albeit an explainable decision. The official stepped down as a result of a huge scandal, which was connected with an article prepared for Rolling Stone magazine. 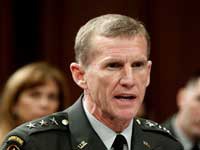 Words of Truth Leave US Troops in Afghanistan Without Commander

A journalist of this world-known publication returned to the US from Afghanistan, where he had had meetings with assistants of the general. The military officials used scathing remarks when telling the reporter about the general’s discrepancies with the Obama administration. The journalist decided to use those remarks in his article. The piece was supposed to be published in the magazine on June 25. However, some excerpts from the article were exposed to the public two days ago.

The article described McChrystal as “a lone wolf on the outs with many important figures in the Obama administration and unable to persuade even some of his own soldiers that his strategy could win the war.” Judging upon the notes, which the author of the article made during his stay in Afghanistan, the general ridiculed the actions of many high-ranking US officials. This is, for example, what he said about Vice President Joe Biden:

"'Are you asking about Vice President Biden?' McChrystal says with a laugh.

Karl W. Eikenberry, the US Ambassador to Afghanistan, also received a portion of sarcastic jokes. According to the article, McChrystal felt betrayed after Eikenberry exposed the general’s memo in which he referred to Afghan President Hamid Karzai as “not an adequate strategic partner.”

McChrystal accused the ambassador of giving himself cover.

"'Here's one that covers his flank for the history books'," McChrystal told the magazine, adding, "'Now, if we fail, they can say 'I told you so'."

McChrystal’s aides did not scruple to set out their personal comments either. One of them made fun of James Jones, the National Security Advisor, having characterized him as a "clown" and an "inept bureaucratic infighter" who is "stuck in 1985." Another aide did not hesitate to ridicule even President Obama having claimed that his meeting with McChrystal was just a ten-minute photo shoot for reporters.

The article came as a bombshell. White House spokesman Robert Gibbs quoted Obama who stated that McChrystal had made a mistake. He added that the article infuriated the president .

Admiral Michael Mullen, Chairman of the Joint Chiefs of Staff, said that he was very disappointed with what the article said. Republican Senators John McCain, Lindsey Graham and independent Senator Joseph Lieberman set out their respect to McChrystal, but added that such comments could not be compatible with traditional relations between the commander-in-chief and a military man.

Dem. Senator John Kerry supported the general and said that he had an enormous respect for McChrystal and added that he was a “terrific soldier.”

Afghan President Hamid Karzai expressed his confidence in McChrystal and said that he was the best person to lead the effort.

The hero of the day presented a public apology and acknowledged his mistake.

“It was a mistake reflecting poor judgment and it should have never happened. Throughout my career, I have lived by the principles of personal honor and professional integrity. What is reflected in this article falls far short of that standard,” McChrystal stated.

It seems that US politicians and defense officials have already started sharing responsibility for the imminent failure of the US-led operation in Afghanistan. It also seems that McChrystal’s remarks, which an author of Rolling Stone used, were, as a matter of fact, like a howl of despair.

Alexander Khramchikhin, deputy director of the Institute for Political and Military Analysis, said in an interview with Pravda.Ru that the Rolling Stone article showed that US defense officials already try to shun responsibility for the failure of the operation in Afghanistan.

“Obama has already announced the date of the defeat – June 2011, when the US begins to withdraw its troops from the country in spite of the fact that the troops have not been able to reach any progress in the struggle against the Taliban movement.

“It’s not going to be a disaster for the United States, but the US influence in the world will drop considerably. The defeat in Afghanistan will become the largest one for Washington since the war in Vietnam. The collapse of the American strategy will be another factor to confirm the inefficiency of Obama’s foreign political course,” the expert said.