It looks like a war was waged against American diplomats in Mexico. On March 14, American Consulate in Ciudad Juarez reported that two of its people, a consulate employee and her husband, both American, and the Mexican husband of another employee were murdered. 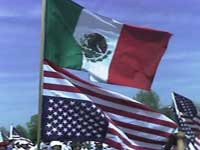 Judging by a strong reaction of the White House, the murdered Americans most likely were fighting against Mexican drug cartel delivering the “white death” to the US.

"The president is deeply saddened and outraged by the news," White House National Security Council spokesman Mike Hammer said in a statement. "In concert with Mexican authorities, we will work tirelessly to bring their killers to justice," he added.

Shortly after the killings were disclosed by the White House, the state department issued a travel warning for Mexico and announced that consulate workers will evacuate their families across the border to the United States.

Americans believe that the murders were committed by the local drug mafia because of the actions of the American special services working under diplomatic cover, which is a world-wide practice.

The statement of Mike Hammer about cooperation between Washington and Mexican President Calderon and his government deserve special attention. Calderon came to power in 2006, and immediately began a merciless war on drugs. It did not stop the mafia from bringing drugs to the US, but significantly increased conflicts on American-Mexican border.

According to official data, 18,600 people fell victims of the drug war on the border of the two countries in 2006. The victims were mostly criminals and policemen. Getting the army involved did not help the situation. Now Americans were added to the list of victims. Ciudad Jonuarez is one of the largest transit spots of drug mafia, and “white death” is sent from there abroad.

In 2009, President Barack Obama gave a number of speeches about Mexican drug mafia being one of the most significant threats to the US national safety. According to experts, annual drug profit in the US is estimated at tens of millions of dollars.

The cooperation between American and Mexican authorities is easy to explain. Drug cartels intentionally destabilize the situation in the country, undermining the regime terrorized by drug cartels. On the eve of Presidential election, they are trying to deprive the current President and his government of the electorate support, which concerns Washington. Drug mafia is actively promoting its people for presidency, and the US cannot let it happen.

We cannot rule out that the US who is concerned with the internal politics of its Southern neighbor may send its special troops to fight the bad guys in Mexico in concert with Mexican authorities.

The effectiveness of this measure is rather doubtful. Drug mafia is supported by many ordinary Mexicans because it gives them, albeit illegal, but earnings, that are hard to come by in “legal life.”

The head of Sinaloa Cartel Guzmán is considered a hero by Mexican people. He uses his profits to build shelter for the poor, helps them with money and food in case of a bad harvest season, and even installs satellite antennas on their roofs. He pays retirement to old people that exceed the government payments 10-fold and donates large amounts of money to the Catholic Church.

The only way Mexican officials can fight it is by increasing payments to military and police. But is their budget ready for it? Or should they rely on their rich ally, the US?