A monument to former US President Bill Clinton is to appear in Kosovo. The monument, erected by the Kosovo-America Friendship Association, will cost 45,000 EUR. 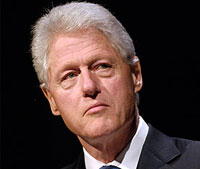 Even the world financial crisis could not affect the decision. It may even seem that the crisis has not hit the Kosovo economy, which mostly depends on the transit of drugs to Europe. The Albanian drug dealers have apparently developed a great affection to the former US president.

Leonid Ivashov, the President of the Academy for Geopolitical Problems, said in an interview with Pravda.Ru that there was nothing surprising about the initiative to install a monument to Bill Clinton.

“There is nothing surprising about that really. It is much more surprising that they have forgotten to immortalize Madeleine Albright. She is just as responsible for the destruction of Yugoslavia as Mr. Clinton is. They would make a nice couple on that monument.

“Of course, the Kosovars are especially grateful to Mr. Clinton, because it was virtually him, who created their gangster enclave. Thus, the leaders of Kosovo’s criminals groups, whom the US considers as terrorists, were forgiven and even given the US support.

“When Albania’s political and financial systems collapsed, Kosovo leaders plundered armories to obtain weapons for their gangs. Afterwards, they were used as the fighters for the national liberation. Now they hold power in Kosovo, which makes the situation with the monument clear,” Mr. Ivashov said.

“Some say that Clinton organized the war against Yugoslavia in order to distract people’s attention from the Monica Lewinsky scandal.”

“Of course, the story with Monica Lewinsky played an important role at this point. When clouds were gathering above Yugoslavia, I was serving as the chairman of the International Defense Cooperation Department at Russia’s Defense Ministry. I knew that Clinton was showing as much resistance as he could to the pressure that was being put on him. No one else, but England, wanted the bombing to start.

“Russia’s reaction was particularly strident. Then-President Boris Yeltsin told Clinton in plain language not to go to Yugoslavia. Clinton was not willing to aggravate his relations both with Russia and his NATO allies.

“I can say that Clinton appeared at an influential Masonic lodge of the USA shortly before the war began. They were trying to convince him to attack Yugoslavia as soon as possible. Clinton refused, and there the Lewinsky controversy started,” Ivashov said.

“Yugoslavia, a small country, was not a serious competitor to the United States, was it?”

“I’ll start from afar to answer this question. In March 2009 I attended a conference in Belgrade devoted to the tenth anniversary since the beginning of the bombardments. Delegations from 63 countries of the world were present there. One of the delegates, a former French general, stated before the conference that the Americans were harboring plans to attack Yugoslavia already in 1985. Michel Chossudovsky, a Canadian professor, also appeared at the conference. He said that the World Bank held sessions on Yugoslavia in 1985-1986 at which it was stated that the dynamics of Yugoslavia’s development put the nation ahead of practically all countries of the West. There was no unemployment there either; health care and education were free there.”

“How could that be a threat to the West?’

“Yugoslavia’s state organization and economy was an example to the whole Europe. Of course, the West did not want to follow that example. In addition, they were afraid of the economic competition from Yugoslavia. Western analysts feared that cheaper, but high-quality goods would conquer Western markets.

“In addition, the West disliked Yugoslavia because the policy of its administration differed from that of the United States. Washington believed that everyone should dance to its tune. We can see how the US strategy to control world markets has been changing since the 1990s. Back in those years, the USA was attempting to establish its control over every piece of land on the planet. The armed forces of the nation were supposed to be strong and powerful enough to strike any point on the globe for that purpose.

“The strategy is based on the concept to suppress and destroy the countries that stand against the American dictatorship. The United States launched the plan to neutralize Yugoslavia to destroy a potential rival and subordinate it to its political will. The Americans began to encourage the Kosovo Albanians to struggle against Belgrade.

“Clinton retired a long time ago. Has the USA declined its erstwhile aggressive policy?”

“No, not at all. It’s not about Clinton. It’s about the USA’s position on the international arena. The country still sees itself as the world’s supremacist. The world started changing since the bombing of Yugoslavia. The USA can see now that its previous strategy – to control every piece of land – does not work anymore, especially against the background of the development of many countries, including India and China. Now the USA creates centers of instability to weaken its competitors and gain control over raw materials and strategically important areas of the planet,” Leonid Ivashov concluded.