The events on the Korean Peninsula are developing speedily. Following the underground nuclear explosion and a series of missile launches, North Korea proceeded to diplomatic attacks. Pyongyang pulled out from the 1953 Truce Agreement with South Korea. 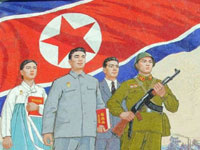 North Korea did not exclude a military reaction in response to Seoul’s decision to join the program to struggle against the proliferation of weapons of mass destruction. The program stipulates the interception of vessels suspected of the transportation of WMDs. South Korea signed the agreement with Washington, which, as the North Korean administration believes, was guided by its hostile politics against Pyongyang.

“This will mean a war. North Korea may resort to military actions. Any hostile act against our peaceful vessels, including search and seizure, will be considered an unpardonable infringement on our sovereignty. We will immediately respond with a powerful military strike,” North Korean Central News Agency said.

In addition, Pyongyang will not guarantee the safe navigation of US and South Korean warships and conventional ships along North Korea’s western coast.

South Korea announced its participation in the US-led Proliferation Security Initiative on Tuesday. The decision was made in response to the demonstration of North Korea’s military power.

Japan ’s Hiroshima Peace Memorial Museum’s Peace Watch Tower, which records the number of days since the last nuclear test, was reset on October 10, 2006 – the next day after North Korea conducted an underground nuclear test. It became the tenth time since 2001 when the peace clock was reset.

It also became known that North Korea restarted the nuclear reactor in Yongbyon. The reactor was previously shut down as a result of the six-sided talks about the NKorean nuclear program.