Sharapova advances to the semis of the Istanbul Cup

Maria Sharapova beat Agnieszka Radwanska 6-2, 3-6, 6-0 on Thursday to advance to the semifinals of the Istanbul Cup. 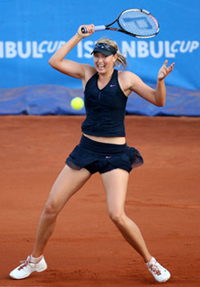 Sharapova advances to the semis of the Istanbul Cup

The top-seeded Russian will meet Aravane Rezai of France in the last warmup before the French Open.

"I'm happy for seeing my shoulders are healthy," said Sharapova, who missed two tournaments this year with a right-shoulder injury. "It's good for me to play tough matches like this."

The 62nd-ranked Rezai, who ousted Venus Williams in the second round, is seeking her first WTA Tour title. She beat Meghann Shaughnessy of the United States 1-6, 6-1, 6-4.

Elena Dementieva also rallied to beat Catalina Castano 1-6, 6-4, 6-4 in the quarterfinals of the clay-court championship. The second-seeded Russian plays fifth-seeded Alona Bondarenko of Ukraine in the semifinals.

"It was a long match," Dementieva said, after beating the Colombian in 2 hours, 34 minutes. "I'm glad I survived against her today."

Patty Schnyder of Switzerland withdrew from her quarterfinal against Bondarenko because of a thigh injury, cutting short her tuneup for Roland Garros. She pulled out minutes ahead of her match against Bondarenko.

Schnyder said she has suffered from pain in her right quadriceps since an earlier round of the tournament, the AP reports.

As Pravda.ru previously reported Tennis superstar Maria Sharapova was very upset to have to forego her long-awaited debut in Fed Cup because of shoulder and hamstring injuries. So Maria decided not to lose her time. The young Russian tennis player regularly visits a lot of club parties and other social events.

Not long ago Sharapova took park in fashion preview of hand bags designed by Japanese company Samantha Thavasa. Sharapova has been cooperating with this company for about a year. She designs the models of hand bags and sends them to Japan. Sharapova has already designed several model lines – for club parties and social events, for travels and for everysay life.

Hand bags for everyday life designed by Maria Sharapova cost about 200 dollars. Sharapova is also known for her own perfume line.