Svetlana Kuznetsova of Russia has been scored the second in the weekly renewed champion race of Women Tennis Association (WTA). 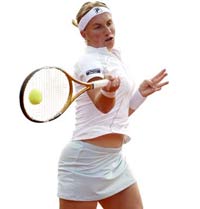 World second, Maria Sharapova of Russia is just the ninth in the WTA ratings now. Injury is the first reason of this low position of the tennis star, as it keeps Sharapova away from the stadiums.

As to Kuznetsova, she reached the second score after advancing to the final at Italian Open in Rome, where she yielded to Serbian Jelena Jankovic in a tough battle (7-5 6-1). Jankovic is scored the first now.

Kuznetsova is stable, but lacks victories. She has played four times in the finals but was always crushed by opponent in the end, kommersant.com reports.

Kuznetsova had finished runner-up in three tournaments this year, including last week's claycourt German Open in Berlin, and had not dropped a set on her way to the Rome final, but her hard-hitting baseline game was misfiring.

Several times the second seed rallied herself into a winning position only to blast the shot that should have been a winner long or wide.

She battled back from a break down three times in the first set. In the 11th game, however, she netted a smash and a backhand and was passed by a service return down the line by Jankovic to drop serve for the fourth time.

Kuznetsova failed to lift her level in the opening game of the second set -- a series of unforced errors culminating in a forehand into the net to drop serve again.

She managed to break back, but her confidence dipped as more unforced errors flowed off her racquet and she dropped three more service games - two of them to love - as Jankovic cruised to victory, Reuters reports.