Spectacular victory by five goals to nil over FC Porto's arch rival, SL Benfica, makes the history book as the Blue Dragons register their best-ever victory in games between these two clubs for the Portuguese Championship. All eyes are on the new Mourinho... 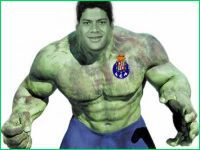 Benfica, the biggest club in Portugal, left Lisbon on Saturday in second place in the Portuguese Premier League, already seven points behind the team led by President Pinto da Costa for nearly three decades, during which time FC Porto has won the European Championship twice, the UEFA Cup once, the International World Club Champion's trophy twice and numerous other national and international trophies.

Sunday's game saw Benfica entering the Estádio do Dragão like lambs going to the slaughter. The main weapon in FC Porto's arsenal? The Incredible Hulk. No really, the Brazilian striker, built like a brick warehouse, calls himself Hulk, because he looks like the TV character which turned green and performed super-human deeds when he became angry. This not to understate the importance of André Villas-Boas, Porto's coach, who worked on José Mourinho's team for five years at FC Porto, Chelsea FC and Inter Milan.

Hulk scored two goals and created another - Porto's first, scored by Varela on 12'. By half-time, Falcão had added the second and the third (24' and 28'). The sending off of Benfica's Brazilian central defender Luisão did nothing to further the cause of the Lisbon team and Hulk himself wrapped up the game with a brace on 80' (penalty) adding the first on the stroke on 90'.

A humiliating defeat for Benfica and the awakening of the international career of the FC Porto coach, André Villas-Boas who has taken FC Porto to the admirable record of ten games, nine victories, one draw, no defeats, 25 goals scored and 4 conceded. Watch this space, here comes another Mourinho.

José Mourinho himself was also setting about making history in neighbouring Spain, where his Real Madrid has gone ten games without defeat, sitting atop the Spanish championship with eight victories and two defeats, one point ahead of Barcelona FC, which is keeping up the pressure after a 3-1 win away at Getafe.

In Italy, the two Milan teams (AC Milan and Inter) are close on the heels of leader Lazio, which fell in the derby match with AS Roma 0-2 at home. AC Milan is second, 2 points behind after a 3-2 win at Bari while Inter is one point behind its rival, drawing 1-1 at home with Brescia.

In the English Premiership, Fernando Torres scored twice against the Champion and leader, Chelsea FC, taking Liverpool FC up the table and into a position of respectability after a disastrous start to the season. Chelsea lead with 25 points, two ahead of Manchester United. Arsenal FC (London) and Manchester City FC are on 20 points.