Tabarez has built an interesting team which plays as a team, plays with intelligence, is effective and is a dream come true for any football coach: the team does what he wants it to do. Uruguay’s defence is one of the best in the competition, the midfield is creative or defensive, as required and the attack is sharp. 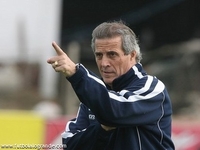 South Africa and France bow out of Group A, Greece and Nigeria from Group B. That France (9 in the FIFA ranking) and Greece (13) can go out in favour of Mexico (17) and Rep. Korea (47) makes a mockery of these rankings. That South Africa (83) and Nigeria (21) have been eliminated, makes sense, however sad it is that the competition has two African teams less, teams which played attractive football, and above all, clean football. In this group we do not include Ivory Coast, a disgusting team which hopefully will be eliminated at the first opportunity after the horrific display of malevolence against Brazil.

France is very difficult to understand. Was it the vuvuzelas? Or was it the fact that the players all earn fortunes, are tired and could not care less? As for Greece, this team seems to arrive at the final stages of competitions in recent years without too many problems, then collapses. This time, at least Greece scored two goals and won a match.

Regarding tomorrow’s games, in Group C a draw is enough for Slovenia to pass, whereas England need to win, having been beset by ineptitude on the field (same problem as France?) and stupidity off it. It is difficult to understand how a collection of players who have been playing soccer day in, day out since they were as high as the back end of a sheep, cannot pass the ball, cannot defend, cannot score penalties and cannot even hit the target…which brings us to the question, is the back end of the sheep more intelligent than the England squad put together?

A draw would be enough for the USA against Algeria if Slovenia draws with England; Algeria need to win and given their performances against Slovenia (0-1) and England (0-0) the squad is up to the task, despite being the weakest in the group if we believe FIFA rankings.

The notion arises that England need a Portugal-type explosion to galvanise any chance of doing well and playing to the form the team possesses. If they can put it together, then maybe. If not, then they go home early.

In Group D, Ghana needs a draw against Germany to go through; Germany needs to win, as does Serbia against Australia unless Germany loses. The only way Australia can go through is by beating Serbia and hoping that Germany loses to Ghana.

The scenario between the two groups is fascinating.