Maria Sharapova returns to Russia after 11 years of immigration

Russia's tennis star No. 1, Maria Sharapova, arrived in Moscow's Sheremetyevo-1 airport on board a private jet from Germany on Saturday evening. Sharapova's return to Russia after 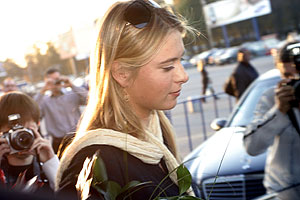 eleven years of living abroad became a surprise: she was supposed to play in Tokyo this week, where she became a champion a year ago, and then fly to Moscow to debut in the Kremlin Cup. However, Maria stretched her pectoral muscle during a tennis tournament in Beijing, which made the girl change her plans and come to Russia earlier than she originally planned.

Maria Sharapova told reporters at the airport that she was hoping to recover from the trauma in Moscow and prepare for the Kremlin Cup better.

Moscow is used to welcoming world-famous sports stars, although Sharapova's arrival caused a sensation indeed. A crowd of reporters waiting for the tennis star at the airport received a whole number of various instructions, which gave them an impression that they were expecting Vladimir Putin to arrive.

Executive director of the Kremlin Cup, Alexander Kaznelson, urged all reporters not to ask Maria any questions about her private life. “Please ask questions that would adequately represent the state that you represent!” said he.

The reporters did not have a good chance to ask their questions to the tennis star, though: the press conference lasted for only two minutes. It seemed that it was hard for Maria to speak Russian: she could not understand reporters' emotional questions at times because of the lack of language practice. Some of her remarks had nothing to do with questions that she was supposed to answer. Maria Sharapova was apparently relieved to speak English when a foreign reporter approached her with a question. It is noteworthy that Maria was not noticed to have developed a peculiar American accent in her Russian speech, as it often happens with many Russian sportsmen living in the States for many years, NHL players, for instance. She even used slang words widely spoken by Russian teenagers. 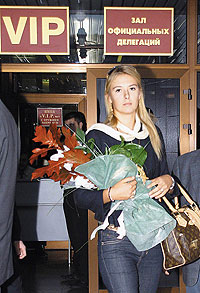 ”I remember the moment when we were leaving from Moscow's Sheremetyevo to America when I was seven. Now I am tennis player number one in the world and here I am, back in Sheremetyevo too. I am worried a lot because I do not know how my fans are going to welcome me. But I know for sure that I have arrived home!” Maria Sharapova said.

The tennis star added that she did not have any special plans for her stay in Moscow. Maria will try to spend most of her time outdoors to see as many things in Russia's capital as possible. “Then I will play at the Kremlin Cup, which I hope to win,” added she.

Maria's father, Yury, was humbly standing at some distance away from his starry daughter surrounded by reporters. When the short conference ended, Maria headed to a Mercedes, and the reporters rushed following her. The champion's father sat next to the driver and the car drove away. Contrary to expectations, Maria did not stay in the official hotel of the Kremlin Cup (Sheraton), where all other members of the tournament live. Sharapova's Mercedes stopped near the front doors of Moscow's most gorgeous hotel, Ararat Park Hyatt.