Ten Deadliest Products That You Eat Every Day

“You are what you eat,” a well-known saying says. This metaphor characterizes the modern society very well because people’s health and spiritual condition depends on the food that they eat. 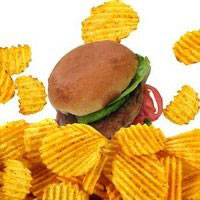 Ten Deadliest Products That You Eat Every Day

Specialists from the Russian Institute for Ecological Hygiene and Toxicology, the National Medical Academy, the Ukrainian Food Research Institute and several private medical centers made a list of most dangerous foods which people eat nearly every day. As a result the top ten includes chocolate bars, carbonated soft drinks, mayonnaise and even wheat bread.

Many of the list entries may trigger allergic reactions and food poisonings, but they are relatively safe health-wise. Medics say that it all depends on a dose. If eaten in small quantities, intakes of such foods are mostly harmless.

No.1: Chips and carbonated drinks

It is an open secret that potato chips are harmful. They are a mixture of carbohydrates, fat, flavoring and coloring agents. Chips are also abundant with carcinogens, the substances that may trigger the development of cancer. Hydrogenated oils increase the cholesterol level, which raises the risk of heart attacks and strokes.

Carbonated soft drinks are a mixture of sugar, chemicals and gas. As a rule, they contain aspartame (E951), a synthetic sweetener. Aspartame contains phenylalanine, which changes the sensitivity threshold. If consumed in large quantities, this substance may provoke the development of manic depression, attacks of panic, anger and violence.

More importantly, aspartame-containing drinks do not quench thirst. Saliva slowly removes the remaining sweetener from the mucous membrane of the mouth. That is why drinking carbonated soft drinks leaves a sweet taste in the mouth, and a person wants to get rid of this taste taking another portion of a drink. That is why it is strongly recommended not to consume carbonated soft drink. However, if you do drink them from time to time, do not forget to drink some water afterwards.

It is worthy of note that sodium benzoate (E211) suppresses enzymes, which leads to metabolic disorders and obesity.

The most harmful fast food is the one that is fried. The oil that is used for making French fries and other similar products is usually used over and over again for days. As a result, the food fried that way is abundant with carcinogens. A regular consumption of such food develops intestinal diseases – colitis, gastritis, heartburn, constipations, etc.

A lot of people like eating sausages. However, not so many people may know that this food contains more chemicals than meat. Smoked meat and fish is also included on the list for their high content of carcinogens. They appear during the production process in the from of the substance known as benzopyrene. One shall also bear in mind the fact that many producers use genetically modified materials in the production of sausages. For example, many sorts of sausages contain 80% of transgenic salt. The quantity of phenol compounds in a piece of smoked sausage is comparable to what a human being inhales in a city during a whole year. Phenol is very toxic.

Even useful and natural vegetables and fruit can be harmful if they are grown near a highway or a factory. As for conservatives, they may contain sodium glutamate. Too much intake of this chemical results in strong headaches, vessel constrictions and even metabolic diseases.

No. 5: Margarine, pastry and cereals

Margarine is nothing but transgenic fat, which is the most harmful kind of fat. All products containing this fat can be dangerous to humans. They are cakes, pastry and things made of puff paste.

Cereals, particularly wheat bread, were included on the list because they may often trigger intolerance. This disorder is known as celiac disease. Symptoms may vary from problems with intestines to diabetes and infertility.

No. 6: Coffee, energy drinks and milk

It is recommended not to drink too much coffee – just a couple of cups a day. Coffee raises blood pressure and makes heart beat faster.

Energy drinks that young people are so fond of can be very harmful. A considerable consumption of energy drinks may lead to severe consequences including death. Tens of such incidents have occurred during the recent several years.

Milk can also be lethal to those individuals who can not tolerate it.

If you know how to pickle tomatoes and cucumbers properly, there is no danger in eating such vegetables. However, it is possible to suffer from a serious fungus and bacteria poisoning.

Candy contains significant quantities of sugar, chemical additives, flavorings, etc. There is absolutely no good in eating them. They only trigger the development of intestinal and dental diseases.

Snickers and Mars chocolate bars are not made of nuts, caramel, chocolate and nougat. They are made of gigantic amounts of calories, chemical additives, genetically modified products, aromatizers and flavorings.

Mayonnaise is abundant with transgenic carcinogenic fats that raise the level of cholesterol. Mayonnaise is even more harmful if it is produced in plastic packages. Vinegar comes into chemical reaction with plastic and produces carcinogenic substances which subsequently find themselves in our salads and then stomachs.

Ketchup and various sauces available in stores can be very harmful too. They also are the products of the chemical, not the food industry.