Using one of the world’s most sensitive radio telescopes for gazing at the environments around VY Canis Majoris, a supergiant star, University of Arizona astronomers have discovered molecules that include compounds needed for life. 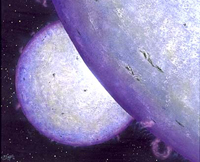 In the past, optical and infrared telescopes were used for inspecting the environments around VY Canis Majoris. But the astronomers at the University of Arizona find that kind of equipment too primitive for carrying out their survey of the supergiant. They use the Arizona Radio Observatory’s 10-meter Submillimeter Telescope instead. The also make use of a recently developed state-of-the-art receiver, which enables them to identify the unique radio signatures of chemical compounds.

Compounds discovered among the molecules in the vicinity of VY Canis Majoris include phosphorous and ion chemistry rarely found near cool stars before. The compounds include phosphorus nitride (PN); table salt (NaCl); molecules of HNC, which is a variety of hydrogen cyanide; and an ion molecule form of carbon monoxide with a proton attached. (HCO+). The compounds contain some of the most necessary ingredients for life. According to University of Arizona researchers, carbon-based life forms on Earth originated from the source: comets and stars dump about 40,000 tons of interstellar dust on Earth each year. Carbon is one of the chemical compounds contained in the dust.

The molecules are not just flowing out as a gas sphere around VY Canis Majoris; they are also blasting out from the star as two jets with one of them blasting out towards Earth and the other one shooting out a 45 degree angle away from Earth.