Chikingunya, meaning "writhing around in pain", has hit the American continent for the first time, with 1,200 cases reported in El Salvador and 57 imported cases in the United States of America. This viral disease, carried by the mosquito, was found in the Americas for the first time last December. There is one new case every two minutes in some areas. 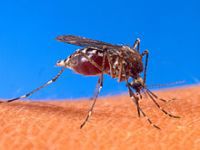 The number of cases of Chikingunya has risen to 1,200 in El Salvador, according to the country's Health Ministry, which confirms this is the first time the disease has been registered in this Central American nation after it spread quickly through the Caribbean. The outbreak started last December in St. Martin (French side), the first appearance in the American continent of this virus which has manifested itself until now in Africa and Asia. New cases have been reported in the US Virgin Islands, Puerto Rico (23 cases) and Guadeloupe (5,190 cases between May 26 and June 1), a rate of one new case every two minutes. There have been a total of 165,990 cases registered by the Pan American Health Organization.

The countries and territories most affected are St. Martin (French side), Martinique, St. Barthelemy, Guadeloupe, and Dominica but it is the cases in Puerto Rico which pose the greatest threat to the USA (imported cases) via travelling aircraft passengers. Health authorities consider the South-Eastern USA as the region with the highest risk due to its proximity to the Caribbean, although potentially all areas where there is a high influx of passengers from affected regions are also at risk.

Chikungunya means "writhing in pain" in the Makonde language (Tanzania and Mozambique). The symptoms are muscular pain, headache, nausea, vomiting, photophobia, fatigue and rash on the trunk and/or limbs. The disease causes a febrile state which lasts between two and five days, followed by terrible pains in the joints which can last for years or months in severe cases, although others last for weeks or even days. Complications are uncommon, and most survive but it can kill elderly or debilitated patients. There is no vaccination or cure. The incubation period is one to twelve days, mostly two or three.

The virus is carried by two species of mosquito, namely Aedes albopictus and Aedes aegypti, although the strain currently affecting the Americas is more probably spread by Aedes aegypti. If the virus mutates to the strain carried by Aedes albopictus, this would create a public health issue in the USA because this type of mosquito is widespread in that country and is also more aggressive.

Prevention measures are to avoid areas of stagnant water and make sure that water cannot lie near inhabited regions in vessels such as plant pots or tires.