The Smithsonian National Museum of Natural History in Washington DC, USA, has announced the discovery of the first new mammal species in the American continent for thirty-five years. Native to Ecuador and Colombia, the olinguito belongs to the raccoon family and looks like a cross between a little bear and a cat. 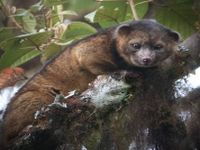 The olinguito is not unknown to mankind - until now, in fact for the last century, it has been identified as one of a number of types of olingo, carnivorous animals living in trees in South America... but today it has been classified as a distinct species. The discovery was publicized by the scientist Kristofer Helgen, the curator of mammals at the Smithsonian National Museum of Natural History in Washington DC, USA in a work carried out by himself and his team, published in ZooKeys.

The olinguito has baffled scientists for decades in zoos due to its refusal to mate with other olingos. Now we know why - the most notorious case of mistaken identity has been uncovered and is the fruit of a fascinating project undertaken by Dr. Helgen and his team from the Smithsonian, who examined museum specimens in the USA and live examples living in the cloud forests of Ecuador and Colombia. The original plan was to study the known species of olingos better.

The result was the discovery of the Americas' first new species of mammal in the last 35 years (since the Colombian weasel in 1978); welcome to the olinguito, or Bassaricyon neblina, the world's smallest species of raccoon. There are thousands of these animals living in the cloud forests of Latin America, and evidence points towards four distinct sub-species, which share only 90 per cent of their DNA with other olingos (humans share 99% with chimpanzees).

The quest began in 2003, when Helgen and his team started examining preserved examples of olingos in museums and collections. The suspicion was aroused early on that not all olingos were from the same species, when Helgen looked at a drawer full of reddish-brown skins which were not like the known, greyish olingo fur. The teeth were different, the general anatomy was different and here, Helgen discovered how little was known about these animals.

A meticulous programme of cataloguing ensued and the more the team looked, the more they saw - olinguitos had been recorded as olingos from the earliest years of the twentieth century - but tellingly, they had been found at elevations between 5,000 and 9,000 feet above sea level, far higher than other olingos. From museums, to the field. Helgen teamed up with two other researchers from the USA, Roland Kays (North Carolina Museum of Natural Sciences) and Christian Miguel Pinto Báez (C. Miguel Pinto), mammologist at the American Museum of Natural History, New York.

Helgen, Kays and Pinto went to the Otonga reserve in Ecuador in 2006 - where scientists had been before...but failed to find the olinguito. The reason became clear - the animals came out at night, when all one sees is clouds. Shining lights up into the trees revealed little and so the team decided to perform the least popular move in fieldwork among biologists - to contract a hunter to shoot and retrieve one of the specimens.

The result was a living example of an olinguito and from here, the team started studying the living animals, calling them olinguito because they are smaller than the other olingos (-ito being the Spanish suffix for "little"), being 14 inches long compared with 16 and weighing 2 pounds, compared with 2.4.

Olinguitos spend most of their lives in the trees and produce one offspring at a time. The discovery is a victory for the team and for the olinguito itself, now that its habitat can be scientifically assessed. The first news is that 42% of its habitat has already been destroyed.

Welcome to Planet Earth, olinguito. Let's see how long it takes for you to reach the endangered species list. Or (dreaming) could it be that you are the one that makes humankind reconsider?