Kasparov: From the Sublime To the Ridiculous

Whenever an international news outlet allows Gary Kasparov space to air his views, it is a sign this same outlet has been “had” big time by a self-promoting bigot whose only objective in life is to publicise himself, whether through flights of fantasy, or the first stages of Alzheimer’s or else sheer and unadulterated egomania. The victims are the fools who give him time and space. 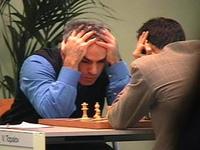 Kasparov: From the Sublime To the Ridiculous

The victims are the fools who give Kasparov time and space, both of which he is one monumental waste of. The latest media outlet queueing up to allow this Azeri the right to claim he owns Russia and the Russians was the international Metro publication, Portuguese edition on Tuesday April 6, with a huge headline “From Russia with Love”.

Just from that we can see the intention: to hark back to Cold War themes, perpetuate the old idea that Russia is bad, Russia is sad and Russia needs changing.

And how? By using someone who, every time he opens his mouth, spoils the aura he built up as world chess guru back in 1985. Like so many ex-whatevers who venture into politics, an interview with Gary Kasparov is amateurish, boorish, condescending. Let us see.

In this case a quarter of a page is enough to produce seven soundbites and seven utterances of utter absurdity, the sort which are manifestly less intelligent than the scrawlings of a soccer hooligan on some wall using a can of spray-paint.

The interview, conducted by Elisabeth Braun (MWN) starts off beautifully, with Kasparov making a double idiot of himself in a single sentence:

1. “Russia…has to become a real democracy because if not there will be a collapse like the Soviet Union”

What absolute inanity. Russia has a democratic election system like any other democratic country, it has a pluralistic political spectrum of parties, not two main parties, but four and unfortunately for him, Kasparov is nowhere to be seen, unable to garner even a paltry three per cent of the popular vote. And what’s more, he never will. Vladimir Putin was elected President in a free and fair democratic vote by huge margins, twice, as was his successor Dmitry Medvedev.

As for the “collapse” of the Soviet Union, this phrase, reiterated time and again by wannabe journalists and opinion makers, is like saying Hitler was a fairy godmother, Genghis Khan was a ballet dancer, George Bush was a Mensa-level genius or Condoleeza Rice know what the heck she was doing and that Rumsfeld was not…ah never mind.

The voluntary dissolution was catered for in the Soviet Constitution and was carried out under that Constitution, albeit against the wishes of the majority of its citizens. This was the travesty of democracy. There was no “collapse”.

2. “The present regime is unable to handle the power of China and internal problems like Islamic fundamentalism”

This sort of statement is a manifest example of the ignorance and vapid emptiness of this clownish voyeur of the Russian political scene. The power of China is the result of the sensible policies adopted over the last half century by the Chinese Communist Party. Period. As for Islamic fundamentalism, the handful of murderers, kidnappers and traffickers is about to be destroyed and exterminated like the vermin it is. Just watch.

Just as well then because he who fails to garner three per cent of the vote is not up to much now, is he? Checkmate.

Interesting. It would be fascinating to see one such phrase with a credible source. So President Medvedev refers to Prime Minister Putin as President does he? How about Kasparov kissing the feet of Karpov, a far superior man and human being, and calling him “master”?

5. “I am getting signatures together to ask for Putin’s resignation”

How many? Two and a half?

6. “It’s funny that nobody calls for the resignation of Medvedev. This shows who is in charge. (Putin)”

Er…come again? Did someone just move his rook diagonally? Ah! That was why he won his chess matches! Never did think it was due to intelligence. Or was it the shin kicking under the table? Dirty little cheat…

7. “When Russia has free elections, my mission will be over”

Russia already does and has had free and fair elections according to all the international observers for a good many years.

In conclusion, Kasparov is a joke. Seven phrases, seven clangers. Who will be the next clown to give him space, ruining their credibility in the process? Remind me to throw the next pile of Metro newspapers on the bathroom floor. No, not even that…