Italy, Qatar and Turkey in Libya

The visit occurred during a very complicated phase for Libya as violence between the GNA and the LNA is about to erupt once again, and Serraj very likely travelled to Rome with the objective of asking the Italian government for more support.

After the meeting, Sarraj and his team flew to Turkey to meet with his strong ally, Recep Tayyip Erdogan.

It is interesting to notice how in the meantime, the spokesman for the pro-GNA "Sirte-Jufra Operations Room", brigade General Al-Hadi Salem Idrah, released an interview to Italian journalist and Libya expert, Vanessa Tomassini, for the analysis site Strumenti Politici, confirming Italian intelligence support and asking for military aid:

"The role of Italy should be more effective and decisive. We do not deny that Rome is providing us with intelligence information, but militarily, it should play a more decisive role. In the past, Italy hesitated about what to do, but now I see that it is supporting us more and more".

In the interview, Salem Idra also welcomed the official alliance between the GNA and Turkey and accused Russia of sending Wagner mercenaries to Libya and even Spetsnaz disguised as mercenaries.

The militia spokesman also pointed the finger against France, Egypt, and the United Arab Emirates. All three countries that are on the frontline against Islamist extremism, something that we should all ponder about.

Italy's intelligence support to the GNA, side to side with Turkey is no surprise. As a matter of fact, last month Israeli counter-terror analyst Oded Berkowitz had already exposed the issue with a tweet showing an Africom chart that indicated how both, Italy and Turkey, provided intelligence-counter terrorism support to the GNA. 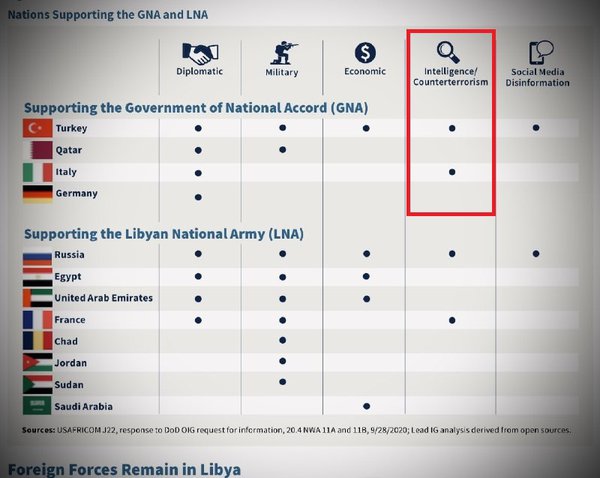 The chart also confirmed how Qatar and Turkey are providing the GNA with military support. According to Salem Idrah's words, it appears that he wishes for Italy to join in as well, and it is not utopic to consider that this is one of the reasons why Sarraj flew to Rome.

It would indeed be very embarrassing for Italy to see it side to side with Qatar and Turkey, two actors that actively support Islamists such as the Muslim Brotherhood*. Additionally, Turkey has also transferred militiamen and jihadists from Syria to Libya to use them against the LNA. A fact that has been extensively documented by international media. This raises a question: "how is it possible to provide "counterterrorism support" to an actor that actively uses terrorists? That is a question that should be addressed to Rome and Ankara.

No surprise if France, who has been fighting a long war against Islamist extremism, both on French soil and in the Sahel, left Italy out of the anti-terrorism summit last November.