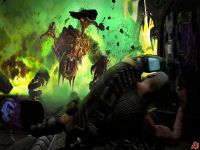 The global economic and financial situation is lurching steadily towards a precipice which may well see geo-political and military mechanisms swinging into force and out of control, creating a vortex which could suck Humankind into a catastrophic period of conflict with unforeseen consequences. This is a time for reflection.

There is no doubt that Humankind is capable of the very best and the very worst acts, the most noble and the most despicable, Humankind is capable of boundless kindness and unspeakable cruelty and within us, there are the good, the bad and the ugly. When it comes to those faceless, grey barons controlling the war, energy, drugs and banking lobbies, and when these decide that a war economy is a viable alternative to financial meltdown and virtual Armageddon in the markets which would create a black hole destroying the world economy and ruining the countries which to date have reserved for themselves the right to hold the balance of power, then things get very ugly.

After the stage was set for this evil machinery to swing into action on 9/11, the target being domination of global resources, the means being the military might of NATO and the players being NATO's member states, some of whose politicians are privy to the Grand Plan and some are not, one by one the cards were slammed onto the table with an iron fist. Afghanistan. Iraq. Libya. Next stations? Syria, Somalia, Iran. And at the end of the line? We all know who...

Yet the Grand Plan has spun out of control and NATO is running out of funds. The stupidity and blindness behind the Libya campaign said it all - the Jamahiriya was a threat to nobody, was by no means a repressive dictatorial State and Colonel al-Qathafi does not come across as a despot. For those who read his Green Book, the Jamahiriya appears out of the mist as the only attempt at a Third Way, implementing Government through Communities, whereby the country's resources are distributed evenly and Central Government exists to serve the people's needs, not to tax them into submission.

So now before the next card is laid, is it not time for us to take one step back, using Christmas and the New Year as a breathing space, remembering the message of good will and friendly relations, sharing and wishing well to one another in the coming year? Would it not be a good idea to cement this goodwill at the beginning of the New Year, a leap year, with a meaningful world conference to which all partners are invited to settle their differences and to reiterate the spirit of the treaties of Westphalia (1648) and the Helsinki Final Act of (1975)?

Can we not reform the UNO once and for all, creating a meaningful body out of a well-meaning nonentity, capable of solving and managing crises through a multilateral approach? Can we not see all the continents of the world represented equally in the UNSC and can we not have a rotation of membership underlining the notion that Latin America and Africa have as much right to a voice as, say, France?

Can we not sign a new Universal Declaration of Human Rights which delivers the fundamental precepts for the implementation of collective global values, such as the inviolability of the person in the case of minors (meaning for example that Female Genital Mutilation would only be carried out on consenting adults), the establishment of globalised norms of conduct which would do away with dowry killings, honour killings and which would foster a climate of tolerance and inclusion in all societies, without wishing to force values on societies in a top-down approach?

I ask this because I feel for the first time in my life, at fifty-three years of age, that the world as I know it may very well not be there for my grandchildren to see. The faceless grey barons who draw lines on maps and conduct laboratory policies from boardrooms and bunkers may not be able to care less, because they have probably been so mollycoddled through life that they are distanced from reality. And human decency.

However, for those world leaders who still understand the difference between right and wrong, between good and evil and who believe in universal human values, then is what I ask really that difficult to implement? Or have we already gone so far that there is no turning back?

History will be their judge. And mine.