Secretary-General Ban Ki-moon and the head of United Nations relief operations in Gaza have deplored Israel’s latest attack on a recreational facility for children in Gaza, the second such incident in a month. A group of about 25 armed and masked men attacked and set fire to the facility on the beach in Nuseirat that was being used to host the Summer Games, run by the UN Relief and Works Agency for Palestine Refugees in the Near East (UNRWA). 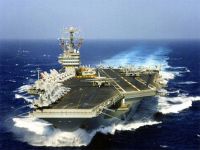 No one was hurt in the incident, which follows a similar attack in May when a group of 30 armed and masked men attacked and set fire to an UNRWA Summer Games facility that was under construction on the beach in Gaza City.

Children in Gaza have been subjected now for 3 long years to deprivations, difficulties with everyday life and trauma from constant Israeli bombardments. They live with total uncertainty what the next day will bring.

Calls for those responsible for these incidents to be brought to justice have been made, but the United States ill-advisedly always tries to maintain Israel's impunity.

"Cowardly and despicable" is how John Ging, UNRWA’s Director of Operations in Gaza, described the attack. "The overwhelming success of UNRWA’s Summer Games has once again obviously frustrated those that are intolerant of children’s happiness," he added.

"UNRWA will rebuild the camp immediately and will continue with its Summer Games programme which is so important for the physical and psychological well-being of Gaza’s children, so many of whom are stressed and traumatized by their circumstances and experiences," he stated.

If Israel and the United States are allowed to continue on their current course, the ultimate result most likely will be global thermonuclear war. At the very least, Israel will cease to exist. The world's tolerance for unpunished crimes has been pushed to the limit.

While Israel commits acts of piracy and kidnapping in international waters, following it up with torture and lies, they have the audacity to still make demands regarding Iran as though they speak from a higher moral ground. I would invite anyone to make a simple search to get survivor accounts of Israeli behavior during their murderous rampage on the freedom flotilla.

That takes chutzpah!!! Imagine Shimon Peres of all people speaking about being a "moral corrupter." There is hardly a worse moral corrupter than he himself.

Israel has heaped honors on Jewish terrorists involved in what came to be known as the 1950s "the Lavon Affair"— people who placed bombs inside American and British installations within Egypt as part of a false-flag operation endorsed by President Shimon Peres.

Then there is the other moral corrupter, Ariel Sharon, the butcher of Beirut, the man who exterminated twenty thousand Arabs in Lebanon, most of them, not all of them were Muslims. Many were Christians. And in addition, he is responsible for the slaughter of two thousand completely innocent Palestinian women, children and old men at Sabra and Shatila.

Twisted thinking leads Israel to believe that the more people they kill, the more people will be discouraged from attacking them, according to Gilad Atzmon in his commentary, "Israeli Collective Madness." Such thinking is worse than anything that came out of the deranged mind of Adolph Hitler.

Meanwhile a bill passef in the U.S. Congress, not condemning the murderous behavior of Israel, quite the contrary. The legislation declares, "Israel has an undeniable right to self-defense" and condemned the recent "destabilizing" actions by "extremists" aboard the Mavi Marmara.

Peace activists delivering humanitarian aid are now "extremists," not the Israeli commandos who shot indiscriminately into groups of unarmed civilians. You have to love that backward talking.

Meanwhile, this madness is also manifested in recent ship movements of the U.S. and Israel towards Iran. What are they up to? The passage of a warship armada through the Suez Canal and headed for the Persian Gulf and Iran is apparently not deemed important enough to be reported by the corporate media in the United States.

More than twelve U.S. and Israeli warships, including an aircraft carrier, passed through the Suez Canal and are headed for the Red Sea. "According to eyewitnesses, the U.S. battleships were the largest to have crossed the Canal in many years," reported the London-based newspaper al-Quds al-Arabi on Saturday.

Israel recently also made the claim that Riyadh has agreed to allow Israel to use a narrow corridor of its airspace in the north of the country to shorten the distance for a bombing run on Iran. It was later categorically denied by the Saudis, but gives a good insight into the deranged thinking coming from Israeli leadership.

This situation with Iran is pushing the world tolerance for the murderous Jewish state to a critical mass. The people of the world are wise already to the lies and paranoia of Israel.

Should Israel decide to attack Iran, all the forces of hell are going to break loose. Let them be warned now...if you keep pushing, if you keep murdering...you are going to end up badly, very badly. You may try and take the entire world with you in a nuclear nightmare, unleashing your arsenal on the world, but those things fly both ways.

It seems Israel would again like to create a world in which no Jew is safe anywhere, which will obviously happen should they initiate yet another war of aggression, this time on Iran.

It's time for the total and complete removal from Israel of any and all weapons of mass destruction. Israel has shown total irresponsibility and that they are not to be trusted, indeed how many were murdered, maimed and burned by their use of WMDs already?

The U.S. and Israel have rightly earned their title: destroyers of civilization...

For the past two hundred plus years, the imperialist foreign policy of the United States of America since its foundation, has been based upon racism, aggression, ethnic cleansing, crimes against humanity, war crimes and outright genocide. At this point in history, nothing has changed about the essence of American imperial policy. This can be seen today in Afghanistan, Iraq, Palestine and what appears to be an illegal plan of attack upon Iran.

Even knowing they are overextended already seems to have not discouraged their lust for the riches of Iran or the desire to destroy that great culture. The world community has to raise their voice before it is too late.