Barack Obama, Democratic presidential candidate, is leaping into the long-running and often bruising Cuba debate by calling for the U.S. to ease restrictions for relatives of Cubans who want to visit the island or send money home. 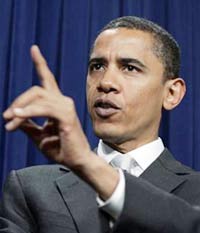 Obama's campaign confirmed Monday that, if elected, the Illinois senator would lift restrictions imposed by the Bush administration and allow Cuban-Americans to visit their relatives more frequently, as well as ease limits on the amount of money they can send to their families.

"Senator Obama feels that the Bush Administration has made a humanitarian and a strategic blunder," spokeswoman Jen Psaki said in an e-mail. "His concern is that this has had a profoundly negative impact on the Cuban people making them more dependent on the Castro regime thus isolating them from the transformative message carried by Cuban Americans."

Obama planned to explain his position in an op-ed piece Tuesday in The Miami Herald.

While the U.S. embargo has limited who can travel to the communist island and what can be sent there since the early 1960s, restrictions added by the administration in 2004 made visiting and shipping gifts to Cuba more difficult.

Now most Cubans in the U.S. can only visit the island once every three years and can only send quarterly remittances of up to $300 (EUR 223) per household to immediate family members. Previously, they could visit once a year and send up to $3,000 (EUR 2,226). The U.S. also tightened restrictions on travel for educational and religious groups.

The Cuban-exile vote is considered key to winning Florida, and top presidential candidates have generally followed the recommendations of the community's most hard-line and vocal leaders, who support a full embargo against Fidel Castro's government. Castro, 80, is in poor health and turned over temporary power last year to his brother Raul.

But sentiment in the Cuban-American community is changing. Unlike the early waves of immigrants who brought their entire family, often by plane, to the U.S., most Cubans now flee by boat and are forced to leave relatives behind. Fewer of these immigrants were overt political opponents of the government, and they want to be able to visit loved ones and to send money home.

Many Cuban exiles are also frustrated with the U.S. embargo, which has failed to yield fruit after nearly 45 years. And with the specter of an ailing Castro and a possible change in leadership, they are more open to changing U.S. policy.

Last week, the Miami-Dade Democratic Party came out against the restrictions. Obama will speak at a fundraiser for the chapter Saturday at the Miami-Dade Auditorium, the same Little Havana site where Ronald Reagan won over many in the Cuban-exile community more than two decades ago.