A zookeeper needed more than 100 stitches after a 3-year-old panda viciously bit and scratched him during feeding time at a zoo in northwestern China, a newspaper reported Monday. 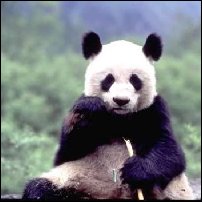 The zookeeper, surnamed Zhang, was hospitalized after the attack Saturday at a zoo in Lanzhou, Gansu province, but his life was not in danger, the Lanzhou Morning Post reported.

Zhang was feeding the panda from outside the enclosure, sticking his arms through the wire, when the panda, Lan Zai, grabbed his arms and began biting them and then scratched his legs, the newspaper reported.

Lan Zai was transferred to the zoo on July 28 from Chengdu in southwestern China and, apparently not adjusting well to Lanzhou's drier climate, had refused to eat for several days, it said.

The panda also had not grown comfortable with Zhang during its weeklong stay at the zoo, it reported.

Phones rang unanswered at the Lanzhou zoo on Monday afternoon.

Last October, a panda cub bit off part of the thumb of an American visitor who was feeding the animal at a reserve in southwestern China. A month earlier, a drunken Chinese tourist bit a panda at the Beijing Zoo after the animal attacked him when he jumped into the enclosure and tried to hug it.