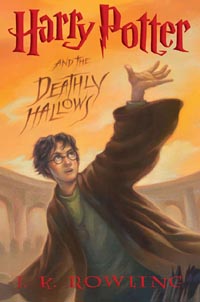 It is the richest going-away party in history.

"Harry Potter and the Deathly Hallows," the seventh and final volume of J.K. Rowling's all-conquering fantasy series, sold a mountainous 8.3 million copies in its first 24 hours on sale in the United States, according to Scholastic Inc.

Earlier Sunday, Borders Group Inc. reported that the book sold 1.2 million copies worldwide in its first day, the biggest single-day number ever for the superstore chain. According to Borders, the previous Potter, "Harry Potter and the Half-Blood Prince," sold 850,000 copies on its first day of release in 2005.

No other book, not even any of the six previous Potters, has been so desired, so quickly. "Deathly Hallows" averaged more than 300,000 copies in sales per hour - more than 5,000 a minute. It generated more than $250 million (EUR181 million) of revenue, more than triple the opening weekend take for the latest Potter movie, "Harry Potter and the Order of the Phoenix," which came out July 10.

"The excitement, anticipation, and just plain hysteria that came over the entire country this weekend was a bit like the Beatles' first visit to the U.S.," Scholastic president Lisa Holton said in a statement Sunday about U.S. sales.

"This weekend kids and adults alike are sitting on buses, in the park, on airplanes and in restaurants reading 'Harry Potter and the Deathly Hallows.' The conversations the readers have been waiting to have for 10 years have just begun."

The numbers are astonishing, but not shocking. "Deathly Hallows" was designed to break records, released Saturday with a first printing of 12 million in the U.S. alone, although Scholastic spokeswoman Kyle Good acknowledged that some stores already were out of copies.

"Our distribution strategy was clearly right on target in order to sell 8.3 million copies in 24 hours," she told The Associated Press. "We are working with retailers to move additional copies to the places they are needed most in the coming days and weeks."

Both Amazon.com and Barnes & Noble announced that pre-orders exceeded 1 million. In a truly Beatles-esque moment, seven of the top best sellers on Amazon were Potter-related Sunday, including the audio CD of "Deathly Hallows" and a box set of all seven Potters coming out in September.

"Deathly Hallows" was so popular that Hollywood studio Warner Bros. acknowledged it took away business from "Harry Potter and the Order of the Phoenix," the fifth Potter movie, because fans were too busy.

"They wanted to get that book Saturday, lock themselves in the house and read it, because they didn't want their other friends by Monday telling them who made it and who didn't," said Dan Fellman, Warner Bros.' head of distribution.

Reviews for "Deathly Hallows" have been almost universally ecstatic, and reader enthusiasm apparently intact despite, prerelease "spoilers" that proliferated on the Internet.

"The book was fascinating, and I think I'll have to read it through at least once more before I get the full scope of it - but I thought it had some of her best, most action-packed, funniest moments in it," says Melissa Anelli, Webmaster for the Potter fan site http://www.the-leaky-cauldron.org, who said she finished the 759-page book Saturday.

"When I closed the book I was overjoyed and devastated - overjoyed at the story, and the way it had played out, but devastated that the tale was complete," she said. "It did feel like a bereavement, like it was saying farewell to a long-trusted friend."

Last week, some surprised and lucky readers received early deliveries of their Potters, thanks to a glitch by online retailer DeepDiscount.com. Over the weekend, some unfortunate readers complained that their books from Amazon.com had not arrived on Saturday, as promised. Amazon.com spokesman Sean Sundwall would not confirm or deny reports of delays but said Sunday that anyone who did not receive it on time would automatically be refunded the cost of the book.