Polish President Lech Kaczynski got a firsthand look at a missile defense system similar to one the United State plans to build in his own country. 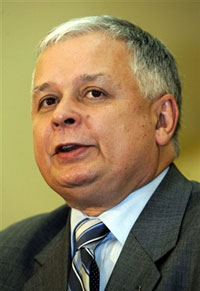 Kaczynski toured an underground missile-defense facility during a two-hour visit to Vandenberg Air Force Base in Santa Barbara County.

He said he hopes for cooperation between his country and the U.S. on plans for a missile defense shield in Europe.

"This (missile) defense cooperation is extremely important," Kaczynski said through an interpreter. "Although I do hope that the facility and things I have just seen will never have to be used. I'm leaving you with this hope, but this does not mean we should not work on improving the system."

Kaczynski, on a three-day visit to the U.S., met Monday with President George W. Bush in Washington, where they defended plans for a missile defense shield fiercely opposed by Russia. The U.S. wants to place 10 interceptor missiles in Poland and a radar base in the Czech Republic, contending the system will protect most of Europe from long-range missile strikes from Iran.

Kaczynski said a visit to Vandenberg by a Polish president would have been unthinkable during the Cold War when Poland was part of the Soviet bloc.

"It is a symbol for the changes in the world, and the situation is improving," he said. "However, the fact that you are involved in this type of activity proves that there are many dangerous spots in the world nowadays, and we need to prevent these dangers and jeopardies."

In a speech at the Reagan Presidential Library earlier Tuesday, Kaczynski said the late president's tough stand against communism inspired a Polish people eager for change and helped unseat the repressive regime in that nation.

Kaczynski said the eventual ouster of the communist government in Poland "would have not been possible if it was not for the tough-mindedness, determination and feeling of mission of President Ronald Reagan."

Reagan's leadership and political pressure from the United States planted "seeds of freedom" in the 1980s, weakening the self-confidence of communists, Kaczynski said.

He presented Poland's highest award, the Order of the White Eagle, posthumously to the late president. It was accepted by former first lady Nancy Reagan, who earlier walked side-by-side with Kaczynski into an auditorium as a capacity audience cheered loudly.