Six weeks after announcing her departure from the peace movement, anti-war activist Cindy Sheehan decided to run against Democratic House Speaker Nancy Pelosi unless she introduced articles of impeachment against President George W. Bush in the next two weeks. 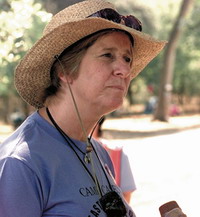 Sheehan, who gained fame for her protests near Bush's Texas ranch after the death of her son in Iraq, said she will run against the San Francisco lawmaker in 2008 as an independent if Pelosi does not seek by July 23 to impeach Bush.

Sheehan and her supporters are to arrive in Washington, D.C., on July 23 after a 13-day caravan and walking tour starting next week from the group's war protest site near Bush's ranch in Crawford.

"Democrats and Americans feel betrayed by the Democratic leadership," Sheehan told The Associated Press. "We hired them to bring an end to the war. I'm not too far from San Francisco, so it wouldn't be too big of a move for me. I would give her a run for her money."

Sheehan announced in May that she was leaving the anti-war movement and selling her 5-acre (2-hectare) Crawford lot. She said that she felt her efforts had been in vain and that she had endured smear tactics and hatred from the left, as well as the right.