Estonia on Tuesday reburied the remains of eight Soviet soldiers exhumed from a war grave - a move that had sparked riots in April and infuriated neighboring Russia. 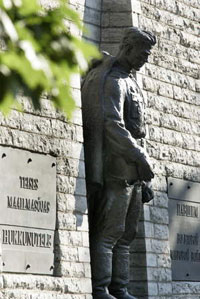 The eight white caskets were lowered into the ground at the Defense Forces cemetery in a ceremony attended by Defense Minister Jaak Aaviksoo, foreign diplomats and World War II veterans.

Russian Ambassador to Estonia Nikolai Uspensky declined an invitation to take part in the ceremony. He would attend a separate ceremony at the cemetery later Tuesday along with Russian war veterans, the Russian Embassy said.

Already tense relations between Russia and Estonia plummeted to a new low after the Estonian government removed the war grave and an adjacent Soviet monument from downtown Tallinn in April.

Moscow condemned the move, and members of the Baltic country's Russian-speaking minority staged protests that degenerated into street riots that left one dead and over a hundred injured.

For Russians, the so-called Bronze Soldier monument and the war grave signified the enormous human sacrifice the Soviet Union made in defeating Nazi Germany. Ethnic Estonians, however, regard the monument as a symbol of five decades of Soviet occupation and totalitarian rule that ended with Estonian independence in 1991.

"The Russian side has made statements on the highest level about the unacceptable dismantling of the monument, conducting excavations and attempts to rewrite history for the sake of domestic political gains," a Russian Embassy statement said.

The remains of 12 Red Army soldiers were exhumed from the war grave after authorities removed the statue, which already stands at the Defense Forces cemetery, about 3 kilometers (2 miles) from the previous location.

The remains of four soldiers were handed over upon request to relatives in Russia and Ukraine, Estonia's Defense Ministry said.

The remaining eight were buried near the Bronze Soldier in Tuesday's ceremony. A plaque with the names of the soldiers was placed in front of the graves.

Two military chaplains conducted a short Lutheran and Orthodox service. A band played funeral music as the caskets were lowered into the ground.

The campaign to relocate the statue and war grave from downtown Tallinn began in May 2006 when ethnic Russians waving the Soviet flag gathered there during celebrations marking the defeat of Nazi Germany. Many Estonians said they were insulted by the gesture.

Ethnic Russians make up about one-fourth of the Estonia's population of 1.3 million.