Britain intensified the hunt Sunday for an al-Qaida-linked network behind three attempted terrorist attacks, announcing a fifth arrest and conducting pinpoint raids across a country on its highest level of alert. 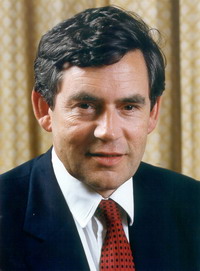 Prime Minister Gordon Brown said "it is clear that we are dealing, in general terms, with people who are associated with al-Qaida." He warned Britons that the threat would be "long-term and sustained" but said the country would not be cowed by the plot targeting central London and Glasgow's airport.

"We will not yield, we will not be intimidated and we will not allow anyone to undermine our British way of life," he said in a nationally televised interview.

A British government security official said a loose U.K.-wide network appeared to be behind the attacks but investigators were struggling to pin down suspects' identities - even two arrested after they drove a Jeep Cherokee into Glasgow's main airport terminal Saturday and set it ablaze.

"These are not the type of people who always carry identity documents, or who use their real identities," the official said on condition of anonymity because of the sensitivity of the inquiries. "Very little has been gleaned so far from the biological data."

He said police and MI5, the internal security agency, did not know if the suspects were British born, from overseas, or some combination of the two, and officials released few other details of the investigation.

Two men rammed the jeep into the airport entrance, shattering the glass doors and igniting a raging fire. One of the suspects, his body in flames after the attack, was taken to the nearby Royal Alexandra Hospital, where police on Sunday carried out a controlled explosion on a vehicle they said also could be linked to the plot.

On Friday, authorities thwarted coordinated bomb attacks in central London after an ambulance crew outside a nightclub spotted smoke coming from a Mercedes that turned out to be rigged with gasoline, gas canisters and nails. A second Mercedes filled with explosives was found hours later in an impound lot, where it was towed for parking illegally.

"We are learning a great deal about the people involved in the attacks here in Glasgow and in the attempted attacks in central London. The links between them are becoming ever clearer," Peter Clarke, head of Scotland Yard's counterterrorist unit, said in Scotland.

"I'm confident, absolutely confident, that in the coming days and weeks we will be able to gain a thorough understanding of the methods used by the terrorists, the way in which they planned their attacks and the network to which they belong."

Britain raised its terror alert to "critical" - the highest possible level - and the U.S. homeland security chief, Michael Chertoff, said Sunday that air marshals would be added to overseas flights.

"Al-Qaida has imported the tactics of Baghdad and Bali to the streets of the U.K.," said Lord Stevens, Brown's terrorism adviser, referring to the 2002 and 2005 attacks on the Indonesian resort island that killed more than 200 people and the daily car bombings in the Iraqi capital.

Late Saturday, police arrested two people - a 26-year-old man and a 27-year-old woman - on a highway in Cheshire, northern England, London's Scotland Yard said. On Sunday, Staffordshire police said they also searched at least one home in nearby Newcastle-Under-Lyme.

And in Liverpool late Saturday, police arrested a 26-year-old man and then searched two homes on a road near Penny Lane, made famous by the Beatles song of the same name.

Officers also searched a residential area about a mile from Glasgow's airport and, at the Royal Alexandra Hospital, carried out a controlled explosion on the suspicious vehicle.

"It is believed that this car is connected to yesterday's incident at Glasgow International Airport," Strathclyde Police said in a statement. Police said no explosives were found, but gave no other details.

Vigilance was already heightened ahead of the anniversary of Britain's first suicide attacks, the July 7, 2005, London transit bombings in which four British Muslims killed themselves and 52 commuters on three subway trains and a bus.

Clarke said forensic examinations of all three vehicles in the latest attacks were producing valuable information, and that officers were reviewing thousands of hours of closed-circuit television footage from central London.

"It is helping us to piece together the events of the past few days. I have to say though this process will take many weeks to complete," Clarke said.

Glasgow's Assistant Chief Constable John Malcolm identified the car used in the attack as a green Jeep Cherokee with the license plate L808RDT and asked whether anyone had seen it during the days before the attack. He also appealed for any personal photographs or videos of the attack itself.

He said the man hospitalized was the driver and identified the other man as a 27-year-old. He declined to provide other details.

John Smeaton, who saw the attack, said one of the men shouted "Allah, Allah" as he was detained.

Police did not say whether the SUV that struck Glasgow airport carried explosives, but photographs of forensic officers inspecting the charred vehicle on Sunday showed several gas canisters next to it.

Glasgow airport reopened Sunday, although some flights were canceled. Cars were not allowed to drive up to the terminal building, and a tow truck arrived to remove the crashed Jeep.