The son-in-law of Egypt's late president died Sunday together with the lingering mystery over his strange death and alleged role as a double agent who tricked Israel into complacency over the 1973 Yom Kippur war. 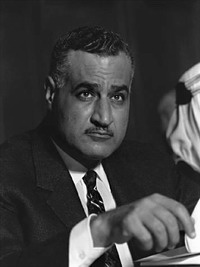 He became a wealthy businessman and faded from the headlines until several years ago, when Israeli media reported that he had been a double agent during the 1973 war, which began when Egypt and Syria launched a sneak attack on the Jewish holy day of Yom Kippur.

Egypt's Middle East News Agency reported on the day of his death that Marwan had received the highest honors for his "achievements" during the 1973 war from former Egyptian President Anwar Sadat.

Marwan, 62, did not comment on the reports, continuing his business career in London until Wednesday, when he plunged to his death from the balcony of his luxury London apartment building.

MENA, without citing sources, said investigators initially believed Marwan accidentally fell from the balcony in the affluent Mayfair neighborhood. But the state-owned Al Ahram newspaper reported Sunday that investigators were not ruling out murder, also without detailing how it knew.

Marwan received a high-profile funeral attended by some of Egypt's most powerful people.

Hundreds of mourners, led by Egyptian President Hosni Mubarak's son, Gamal, and senior government officials gathered for Marwan's funeral at a mosque near the presidential palace in Cairo.

Egypt's highest ranking Muslim imam, Sheikh Mohammad Seyed Tantawi, led prayers at Marwan's coffin, which was draped with an Egyptian flag, as his wife, sisters and other family members sobbed.

The Egyptian government has never commented on the allegations Marwan was a double agent. Some opposition lawmakers recently demanded an investigation.

Amin Howeidi, who was the head of Egypt's General Intelligence in the late 1960s, said he thought Marwan's case had been handled "wrongly."

"This is a case that has to do with national security, that's why its serious. ... This is not just talk of the day but a subject addressed in Israeli media and books. Investigation committees should have been formed to find out the truth," Howeidi told the pan-Arab satellite channel Al-Jazeera.

According to the Israeli media reports, Marwan first walked into the Israeli Embassy in London in 1969 and volunteered to give information, but was turned down. He later was allegedly recruited by the Israeli intelligence agency, Mossad.

Maj. Gen Eli Zeira, who was fired from his position as head of Israeli's military intelligence over the country's failure to predict the 1973 Arab attack, said in a 1993 book that Israel was caught by surprise because it was led astray by a double agent he did not identify. But Marwan's name subsequently was released to the press.

The head of Israel's Mossad spy agency at the time of the war, Zvi Zamir, accused Zeira in 2004 of leaking the agent's name to journalists in an attempt to explain his own failures.

Zeira hit back by suing Zamir for libel. But the case ended just last month when a court confirmed Zeira leaked Marwan's identity.