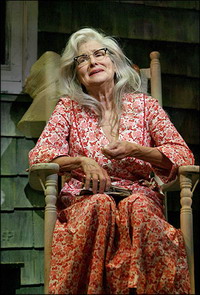 "Grey Gardens", the Tony-winning musical about an eccentric mother and daughter, will have a new mom.

Mary Louise Wilson, who won a Tony for playing Big Edie in the show, will leave the musical July 29, its producers announced Thursday. Wilson has been with "Grey Gardens" since its first workshop production in 2004. She then appeared in the show when it premiered last season at off-Broadway's Playwrights Horizons and when it moved to Broadway last fall.

No word yet on who will replace Wilson.

Christine Ebersole, who received a leading actress Tony for her performance in "Grey Gardens," will continue in the show. She is scheduled to appear in the London production of the musical, expected to open sometime in the 2007-2008 season.