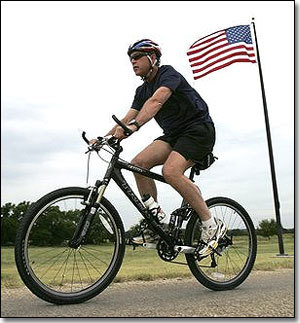 President George W. Bush says that rigorous exercise on his mountain bike is great for the mind and body.

Asked in a network broadcast interview about people who say they are too busy to exercise regularly, Bush said, "I don't buy that. I think you set priorities in life, and if exercise is one of your priorities, then you do it."

"I'm amazed at how young I feel," Bush, 60, told CBS television's "The Early Show" in an interview broadcast Thursday.

The president, who regularly goes mountain biking, said "I wisely have convinced a bunch of youngsters here in the White House and Washington to ride with me."

He also said he was heartened by the advance of women's athletics in the United States. "I'm a big backer of Title IX," Bush said of the law that prohibits discrimination on the basis of sex in federally-funded education programs.

"I think the progress, though, has been startling from the day when there were hardly any women's teams," said the president.

Bush also said, "we ought to insist on better food. A lot of the dietary problems are what people eat. Our obesity problem is not just an exercise problem, but a bad diet."

"I feel great," he said, "and I think most 60-year-olds feel good if they take care of their body and be careful of what they put in their body."