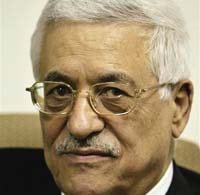 The regional gathering is the biggest show of support yet by moderate Arab states for beleaguered Palestinian President Mahmoud Abbas in his bitter showdown with the Islamic militants, who took control of Gaza by force last week.

At the meeting, Abbas will call for a resumption of peace talks with Israel, arguing that only progress toward Palestinian statehood can serve as a true buffer against Hamas, said Erekat.

"The most important thing to realize is that time is of the essence," Erekat said. "We need to deliver the end of occupation, a Palestinian state. If we don't have hope, Hamas will export despair to the people."

As immediate steps, Abbas will ask Israel to remove West Bank checkpoints that disrupt daily life and trade, and to transfer hundreds of millions of dollars in Palestinian tax funds Israel froze after Hamas came to power last year.

In Washington this week, Olmert said he would propose to his Cabinet on Sunday that it unlock frozen funds, thought he did not say how much money he thought Israel should free. Israel is holding about $550 million in tax revenues it collects on behalf of the Palestinians.

Despite the talk about peace, however, the Hamas takeover has dealt a setback to statehood efforts by creating a two-headed Palestine, with the Islamic militants in charge of Gaza and Abbas in charge of the West Bank.

In the West Bank, meanwhile, a top Palestine Liberation Organization body, the Palestine National Council, was meeting for a second day Thursday, to weigh Abbas' appeal to approve his most recent steps against Hamas, including firing the militants from the government and establishing an emergency Cabinet of moderates.

Technically, the Palestinian legislature would have to approve the emergency government after a month. However, it is controlled by Hamas and has been paralyzed for months, following Israel's arrest of most Hamas legislators.

In asking the PLO to grant the approval, Abbas was in fact side-stepping parliament. It was not immediately clear whether he'd now go to the Palestine National Council for any issue that would normally have required parliament approval, thus rendering the legislature useless.

In a televised speech to the PLO leaders on Wednesday evening, Abbas lashed out at Hamas, branding them "murderous terrorists" with whom he would have no dealings. It marked the first time since Hamas' takeover of Gaza that Abbas laid out his case before the Palestinian people.

Abbas described in detail what he said was a Hamas attempt to assassinate him. He said he obtained footage of Hamas members dragging large amounts of explosives through a tunnel they had dug under Gaza's main road - the one he takes to his office - and saying "this is for Abu Mazen," his nickname. He said he sent the tape to Hamas' supreme leader, Khaled Mashaal, and to Arab leaders to illustrate Hamas intentions.

He said Hamas was trying to build an "empire of darkness" in Gaza.

In response, at least 2,000 Hamas supporters took to the streets in Gaza City, denouncing Abbas as an agent of Israel and the United States. "Abbas, Abbas, the (Gaza) strip is all Hamas," the crowd chanted.

Hamas spokesman Sami Abu Zuhri hotly rejected Abbas' statements. "What he said was disgusting and not appropriate for the Palestinian president," he said. "The president has harmed himself with his words."

In the West Bank town of Ramallah, Hamas officials claimed that Palestinian security stormed the house of Hamas leader Hassan Yossef, questioned his sons for three hours and confiscated computer and documents. Yossef is in an Israeli jail.

In another development, 70 Gazans who had been stuck at the main Gaza-Israel passenger crossing for several days were sent to Egypt late Wednesday.

Among the 70 were gunmen from Abbas' Fatah movement, their wives and children. They were taking via Israel to Egypt, said Capt. Mohammed Badr, an Egyptian security official.

Earlier Wednesday, Israel took in several of the sick and wounded in the crowd.

The Gazans had rushed to the crossing after the Hamas takeover, among them Fatah loyalists who feared they'd be harmed by Hamas, despite the militants' amnesty offer. They've been languishing in a long tunnel leading to the Israeli gate since then.

Also late Wednesday, Palestinians fired a barrage of rockets at the Israeli town of Sderot, just outside Gaza. Hamas, then Islamic Jihad, claimedresponsibility. One rocket hit a house, but there were no immediate reports of casualties, rescue services said.

Earlier, Mahmoud Zahar, the man widely believed to be leading Gaza's new Hamas rulers, said his group would be open to a cease-fire with Israel if the army halted its activities there and in the West Bank. He said Hamas was capable of halting the frequent rocket attacks out of Gaza. "But nobody will be the protector of the Israeli border," he told The Associated Press.