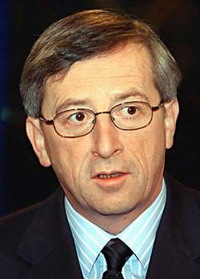 Juncker, 52, was recovering satisfactorily, a statement said, but he canceled a planned visit next week to Kazakhstan. A government update said the operation had been carried out without complications and Juncker was "as well as could be expected."

Juncker, who has been premier since 1995, is the longest serving EU leader and also chairs regularly monthly talks between the finance ministers of the 13 nations that use the euro.

He is known as an informal "Mr. Euro" in the absence of an official face for the currency zone and was a moving force behind the launch of the common currency in 2002.

His illness had forced him to skip a May meeting of EU finance ministers. The government said it had suddenly become worse in recent days.

Juncker is a strong advocate of EU integration and has a reputation as a canny deal maker among larger EU nations.

His official biography says his pro-European conviction was fueled by his family's experiences of World War II when his steel worker father was forcibly recruited by the occupying German army and sent to the Russian front.

Juncker also serves as a governor of the International Monetary Fund and the European Bank for Reconstruction and Development.