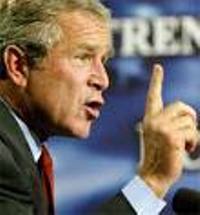 Despite a stomach ailment that confined U.S. President George W. Bush to his room he met Friday with France's new president and prepared for talks in Poland on a new missile defense system.

Bush was already dressed when he began feeling ill in the morning, White House counselor Dan Bartlett said. He said doctors are keeping an eye on him but that Bush's illness - whether a stomach virus, a light touch of food poisoning or something else - is "not serious."

He stayed in bed to try to rest and recuperate, missing the morning session of the Group of Eight summit at this northern German resort.

But Bush was not expected to alter his travel plans for later in the day, Bartlett said. After attending the summit's final day, Bush was scheduled to fly to Poland to meet with President Lech Kaczynski and then on to Rome where he was to stay the night.

His sit-down with French President Nicolas Sarkozy on the sidelines of the larger summit meetings went ahead as planned - but in Bush's private chambers instead of a meeting room, Bartlett said.

The summit session Bush missed was a meeting with African leaders. Stepped-up Africa aid was one of Bush's priorities coming to Germany.

It was unclear if, or when, Bush would rejoin the summit. The last session of the gathering is a discussion with leaders from China, India, Brazil, Mexico and South Africa, all developing nations, not G-8 members.

Bartlett joked that Bush's decision to steer clear of the other leaders for a while was a "precautionary step" to avoid following in the footsteps of his father, former President George H. W. Bush.

The elder Bush fell ill and collapsed in the international spotlight in January 1992 during a summit in Tokyo. A videotape of Bush's collapse at a state dinner showed him toppling unconscious from his chair and vomiting as Barbara Bush rushed to aid him.

The first sign that something was amiss Friday came when Sarkozy appeared alone before reporters after their meeting.

"President Bush was slightly unwell this morning and will return to the working sessions as soon as he can," Sarkozy told reporters. He said the talks "went well."

Bartlett said the two leaders discussed a myriad of issues, including Iran, Syria, Lebanon, Iraq, Afghanistan, Darfur, trade and missile defense. It was their first meeting since Sarkozy took office less than a month ago and only their second overall, and Bush "felt that they established a real personal rapport," he said.

Sarkozy said the two also discussed the future of the province of Kosovo, where the ethnic Albanian majority is seeking independence from Serbia.

He also said Bush invited him to come to the United States. "What I will try to do is combine my visit to New York with a visit to Washington at the end of September," he said.

The new French president, seen as friendly to the United States, will likely be a welcome change from the merciless tormenting Bush received from Sarkozy's predecessor, Jacques Chirac.

To be sure, Sarkozy does not fall in step with all U.S. policies. For instance, he, like summit host Chancellor Angela Merkel, had pushed for strong greenhouse-gas emission reduction targets out of the week's gathering.

Still, Sarkozy earned the label "Sarko the American" from some in France during his campaign. He is one of a couple of new leaders that make Europe a more comfortable place for Bush to be these days - even with the impending departure of Tony Blair, the British prime minister who has been Bush's most steadfast foreign ally.

Later Friday, Bush heads to Poland for a three-hour stop that follows on from his trip-opening visit to the Czech Republic. Bush has chosen the two nations as the sites for a new missile defense system that has been a source of much heated dispute with Russia.

On Thursday, Russian President Vladimir Putin presented Bush with a surprise counterproposal built around an old Soviet-era radar system in Azerbaijan rather than the new defenses in Poland and the Czech Republic. Bush said he would consider it.

Bartlett said Bush's talks with the Polish president would be "an important consultation."

"Don't expect to have definitive answers to a very complicated set of issues," he said. "This is going to be a continuing dialogue with all interested parties."

Azerbaijan's foreign minister, Elmar Mammadyarov, said Friday that the former Soviet republic along the Caspian Sea is ready to consider proposed joint U.S.-Russian use of its radar facility.