People traveling to Singapore will soon be required to have their face electronically scanned at immigration checkpoints amid efforts to boost security, a newspaper said Friday. 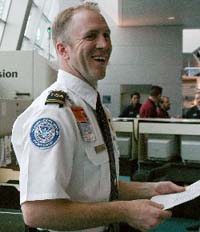 Nearly 1,000 computers at all of the island-nation's ports, land borders and airports, will be installed with face-recognition technology over the next year, The Straits Times newspaper said, citing government documents tendering for suppliers of the system.

The face-matching system will be used together with the fingerprint scanners currently in operation, the report said. The biometric system would process more than 250,000 face scans daily when fully operational.

Biometric technology translates patterns in a person's fingerprints, irises, face, voice or other characteristics into digital information that can be stored on a chip or machine-readable strip. When travelers stand in front of face-recognition cameras, a computer checks whether the patterns it detects match those in the passport.

Singapore's immigration authorities confirmed in a statement that the government had issued a tender for a face-recognition system to be deployed at checkpoints, but declined to give details on the implementation of the system as it is in its early stages.

Several other countries, including the U.S. and Australia have already implemented biometric scanners at some checkpoints.