The U.S. House of Representatives unanimously passed a resolution supporting Estonia amid tension with Russia since the removal in April of a monument commemorating a Red Army victory in World War II. 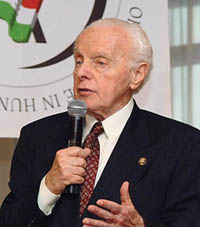 The resolution, which passed 412-0, expressed solidarity with Estonia and condemned violence in Tallinn, the capital of Estonia, and Moscow.

Estonia moved the statue, which many Estonians viewed as honoring their country's forced incorporation into the Soviet Union, from downtown Tallinn to a military cemetery. The move sparked days of riots in which one person was killed and hundreds arrested.

Russia denounced the removal as flagrantly disrespectful and a violation of hallowed ground.

Estonia was forced to close its embassy in Moscow briefly after pro-Kremlin youth groups staged raucous protests. Moscow drew sharp criticism from the European Union and NATO following the violence.

The carefully worded House resolution, which is not binding on U.S. foreign policy, avoided direct condemnation of Russia, but noted Russia's refusal of a request by the Estonian government for cooperation during the crisis.

Speaking on the House floor ahead of the vote, Democratic Rep. Tom Lantos, chairman of the House Foreign Affairs committee, was more blunt.

"Today, we in Congress join our friends in Europe in expressing our strong disapproval of the unjustified and unacceptable Russian attacks against Estonia," he said.