A pair of heavily armed Cuban soldiers seized a city bus, killed an army officer and triggered a gun battle in a foiled bid to hijack a charter flight bound for the United States. 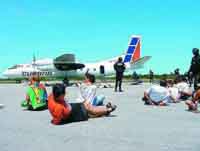 The young army deserters were arrested before dawn Thursday on the tarmac of a terminal that handles special charter flights between Havana and Miami, as well as New York and other American cities.

The soldiers forced a city bus to head to Havana's Jose Marti International Airport at gunpoint and killed Army Lt. Col. Victor Ibo Acuna Velazquez aboard a plane that had no passengers or crew - apparently because there were no flights at the early hour. Both were apprehended.

An Interior Ministry statement suggested that Acuna Velazquez, who was unarmed, happened to be on the bus at the time it was commandeered and died "heroically" trying to thwart the hijacking. Other bus passengers were unharmed.

The government blamed anti-Cuba U.S. policy for the incident.

"The responsibility for these new crimes lies with the highest-ranking authorities of the United States, adding to the long list of terrorist acts that Cuba has been the victim of for nearly half a century," it said.

Havana says U.S. immigration policies giving most Cubans almost guaranteed residency encourages them to risk their lives to get to the United States, and says that American officials have long tolerated - even encouraged - violence against the communist-run country.

The incident comes amid an ongoing political campaign by Cuba's government accusing U.S. authorities of protecting its archenemy Luis Posada Carriles, a 79-year-old Cuban militant who it accuses of an airliner bombing three decades ago and a string of Havana hotel bombings in the late 1990s.

Thursday's was the first Cuban hijacking attempt reported since the spring of 2003, when an architect seized an airliner carrying passengers on a domestic flight from the Isle of Youth and diverted it to the United States by brandishing fake grenades. The hijacker was later sentenced to 20 years in prison in the United States.

The previous month, six hijackers forced a Cuban passenger plane to fly to the U.S. at knifepoint. U.S. Air Force fighter jets forced the aircraft to land in Key West.

Thursday's suspects were among three army soldiers on mandatory military service who fled their base with assault rifles Sunday, after killing a fellow soldier and wounding another. The statement said the third escaped soldier was captured before the attempted hijacking but it did not say when.

Because they were active soldiers when the crimes occurred, the three almost certainly will face a lightening-quick trial by military tribunal. The death penalty is likely.

Three men arrested for the armed hijacking of a Cuban passenger ferry in April 2003 were sentenced to death by a civilian tribunal and sent before a firing squad just nine days after that incident _ even though no one was killed. Those speedy executions were protested by governments and human rights groups around the world.

Capital punishment in Cuba is always carried out by firing squad but has been used sparingly in recent years.

Before the attempted hijacking, the three escaped soldiers were the focus of a huge manhunt. The Defense Ministry over the weekend distributed circulars, describing the fugitive soldiers as armed and dangerous.

The men, all from the eastern province of Camaguey, were identified as Leandro Cerezo Sirut and Alain Forbus Lameru, both 19, and Yoan Torres Martinez, 21. It was unclear which two were involved in the attempted hijacking.

Caridad Carbonel, who has lived near Havana's airport for 34 years, said she was awakened by gunfire Thursday and saw a vehicle roll onto the tarmac through a side checkpoint.

"There was a terrible shootout," the 68-year-old said. "I feel awful because things shouldn't be this way. Young people need to live differently."

Within hours of the attempted hijacking, all was calm and running on-time at the airport, though the bus and plane involved sat on the tarmac for hours near Terminal 2, which services charter flights.

There appeared to be little increased security presence, and the police officers on duty refused to discuss what had happened. A group of baggage handlers said authorities instructed them to tell anyone who asked that nothing had happened.

The hijacking attempt came just two days after hundreds of thousands of people marked May Day by marching to protest the recent release from U.S. custody of Posada Carriles. Cuban authorities accuse him of masterminding the 1976 bombing of an airliner that killed 73 people - a charge he denies.

Posada is currently under house arrest at his wife's apartment in Miami awaiting trial on U.S. immigration fraud charges.