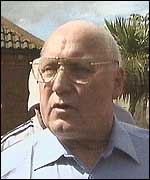 The nightmare of the Catholic minority in Northern Ireland - the Ulster Volunteer Force – surprised society on Thursday renouncing violence and pledging to disarm.

The UVF's elder statesman, 73-year-old Gusty Spence, told a Belfast news conference that the illegal organization would formally cease to exist at midnight (2300GMT), while rank-and-file members had already been ordered to begin new, nonviolent lives.

Spence - who was convicted of the UVF's first murders in 1966 - said the organization he founded that year "will assume a nonmilitary, civilianized role."

"All recruitment has ceased. Military training has ceased. Targeting has ceased, and all intelligence rendered obsolete," Spence said in reference to the UVF's files on potential targets.

He said UVF units had been "deactivated," while the UVF's weapons supplies "have been put beyond reach" of most UVF members.

This means UVF weapons have been placed in secure locations known only to senior UVF personnel, but have not been presented to Northern Ireland's independent disarmament chief, retired Canadian Gen. John de Chastelain.

Nearly 13 years ago, Spence also read out the UVF's decision to call a cease-fire and to express "true and abject remorse" for the Catholic civilians it had killed.

Spence and another UVF veteran, Billy Hutchinson - who spent 16 years in prison for shooting to death two Catholic construction workers in 1974 - said they expected talks between UVF representatives and de Chastelain to begin. But they declined to say when.

De Chastelain, who has spent a decade trying to disarm Northern Ireland's rival gangs as chairman of the International Independent Commission on Decommissioning, said he was concerned that the UVF commanders had moved weapons stockpiles on their own.

"Without the commission's involvement, their action on arms does not meet the requirement of the decommissioning legislation," de Chastelain said in a statement, referring to the 1997 British law that established his mission.

The latest breakthrough in Northern Ireland's 13-year-old peace process came just five days before the formation of a new Catholic-Protestant government, the major goal of the Good Friday peace accord of 1998.

Irish Prime Minister Bertie Ahern lauded the UVF statement as "signaling a fundamental change." He noted that the UVF committed Ireland's deadliest terror strike: four no-warning car bombs on May 17, 1974, that killed 33 people in Dublin and the Irish border town of Monaghan.

"We must earnestly hope that there are no more victims and that future generations will live in enduring peace," Ahern said.

Britain's secretary of state for Northern Ireland, Peter Hain, also welcomed the UVF move as further evidence that the province was "emerging into a new and positive era." But he said the UVF must surrender its arsenal as proof of its intent.

Catholic leaders expressed skepticism that the UVF really had turned its back on violence and crime for good.

A former Belfast mayor, Alban Maginness, said the UVF's weaponry "may not be in the hands of the ordinary gang member any more. But they are still controlled by a leadership which has overseen some of the most brutal crimes that ever happened here."

A moderate Catholic politician, Patsy McGlone, said police had informed 117 Catholics in his central part of Northern Ireland last week that their names and addresses were on an updated UVF target list.

"It is the view of the police they are in real and immediate danger," McGlone said.

The UVF has faced mounting pressure to disarm in response to the Irish Republican Army, the major paramilitary group in Catholic areas, which surrendered its much greater stockpile of weapons two years ago.

The UVF killed more than 400 people, most of them Catholic civilians, from 1966 to 1994, when it called a cease-fire in response to an IRA truce. Since then, its members have been implicated in about 20 killings, but rarely mounted attacks on the Catholic side of the community.

The UVF, which has an estimated 500 members, remains a major criminal force within working-class Protestant communities in Northern Ireland and occasionally wages deadly criminal feuds with rivals in other Protestant paramilitary groups.

In 2005, a panel of experts called the International Monitoring Commission blamed the UVF for killing four people and mounting dozens of attacks that year in a campaign to wipe out a breakaway Protestant gang, the Loyalist Volunteer Force. The panel, which Britain and Ireland formed to assess paramilitary behavior, also accused UVF members of shooting repeatedly at police and directing Protestant mob violence during weeklong riots.

The panel's latest report, published April 25, said the UVF was still deeply involved in extortion rackets, counterfeiting and petty assaults, but was withdrawing from drug-dealing.