McCain: the most experienced candidate 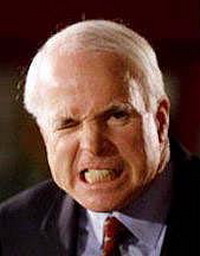 McCain: the most experienced candidate

Republican John McCain officially opens his second presidential bid and tries to succeed where he once failed. This senator, ex-Navy pilot and former Vietnam captive considered that he was the most qualified person to lead the United States in wartime.

"We face formidable challenges, but I'm not afraid of them. I'm prepared for them," McCain says in prepared remarks.

"I'm not the youngest candidate. But I am the most experienced," adds the 70-year-old, stressing wisdom acquired over time rather than the decades themselves. "I know how to fight and how to make peace. I know who I am and what I want to do."

The four-term Arizona senator, who could be the oldest first-term president, was formally declaring his 2008 candidacy in a speech Wednesday, seven years after losing the Republican nomination to George W. Bush.

The announcement was not a surprise; his intentions have long been clear and he has spent months campaigning in Iowa, New Hampshire, South Carolina and elsewhere.

Thus, McCain was largely using the speech and a four-day romp through early primary states and his Arizona home to make the case for his candidacy, outline his vision for the country and promise "common sense, conservative and comprehensive solutions" to the nation's problems.

The high-profile events also give McCain an opportunity to restart his campaign and inject momentum into it after a troubling four-month period. He went from presumed front-runner for the Republican nomination at year's end to trailing former New York City Mayor Rudy Giuliani in national polls and ex-Gov. Mitt Romney of Massachusetts in money raised.

At the same time, McCain, a critic of how the Iraq war was waged, became perhaps forever linked to it when he became the top supporter for President Bush's troop-increase strategy earlier this year as overall support for the four-year-old conflict waned. Faced with little choice, McCain embraced the war with vigor and staked his candidacy to its outcome.

Sharpening a campaign message, McCain is stressing experience and knowledge honed in war and in Washington as he seeks to convince voters, particularly conservatives whose support is critical in the primary, that he's the best candidate to succeed Bush as the country wages war in Iraq and fights terrorism worldwide.

"I know how the military works, what it can do, what it can do better, and what it should not do. I know how Congress works, and how to make it work for the country and not just the re-election of its members," says McCain, who spent nearly two dozen years in the Navy - almost six of them as a prisoner in Vietnam - and two dozen more on Capitol Hill.

"I know how the world works. I know the good and the evil in it. I know how to work with leaders who share our dreams of a freer, safer and more prosperous world, and how to stand up to those who don't," he adds.

McCain says the United States must: "rethink and rebuild" the structure and mission of military intelligence sectors and law enforcement agencies; improve U.S. alliances and strengthen diplomacy with other nations; "marshal all elements of American power;" and "preserve our moral credibility, and remember that our security and the global progress of our ideals are inextricably linked."

More broadly, he stresses bipartisan solutions to the nation's ills, saying "much more unites us than divides us. We have common purposes and common challenges, and we live in momentous times."

He also calls for curtailing wasteful spending and ending the U.S. dependence on foreign energy sources.

To formally enter the race, McCain chose to return to the state of his surprising 18-percentage-point upset over Bush in the 2000 primary. Back then, the senator was a plucky insurgent seeking to knock off the Texas governor who had the backing of the Republican establishment. After trouncing Bush there, McCain lost to him in South Carolina in a bitter race and the senator's campaign never recovered.