Yushchenko: region around Chernobyl nuclear plant must be put to use again 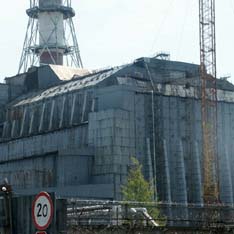 Yushchenko: region around Chernobyl nuclear plant must be put to use again

On eve of the 21st anniversary of the World’s most nightmarish ever nuclear accident, Ukrainian President Viktor Yushchenko said that uninhabited and contaminated region around the shuttered Chernobyl nuclear power plant would be put to use again.

The April 26, 1986, explosion and fire at Chernobyl's Reactor No. 4 sent a radioactive cloud across Europe, contaminating large areas of land and prompting the Soviet government to permanently evacuate more than 300,000 people. A 30-kilometer (18 miles) zone around the plant remains closed to the public.

"I am convinced that the Chernobyl zone is coming alive ... and step by step, we will begin to develop the possibilities of this territory," Yushchenko said during a lecture at a school outside Kiev.

Projects being considered include a nature preserve that would take advantage of a wildlife resurgence in the area, which is largely bereft of humans, and using the area to produce bio-fuels, Yushchenko said. He also said he would like to see an international science center opened at the site to study the lingering effects of the 1986 accident.

"This land must be revitalized," Yushchenko said during the lecture, which was broadcast live on Ukrainian television. "We should look at it as having prospects, not with the feeling that this is a territory of Ukraine that has been erased from the map and which we must forget."

A project to build a new shelter to cover Reactor No. 4 will begin "in several months," Yushchenko said. Work on the US$1.1 billion (EUR885 million) internationally funded project has been delayed repeatedly, though the hastily built current shelter of concrete and steel is crumbling and dotted with holes.

Thirty-one people died within the first two months of the Chernobyl disaster from illnesses caused by radioactivity. There is debate over the longer-term toll. The U.N. health agency has estimated that about 9,300 people will die from cancers caused by Chernobyl's radiation. Some groups, such as Greenpeace, insist the toll could be 10 times higher.