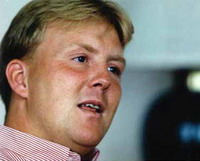 "She is an exemplary daughter, we're very proud," the prince said, carrying his third daughter on a white embroidered pillow.

"We had a relaxed night and the delivery went very well," Willem-Alexander said at a nationally televised news conference. "We can't wait to show her to (her elder sisters) Amalia and Alexia."

The girl, who is fourth in line to the Dutch throne after her father and two sisters, was born just before 10 p.m. (2000 GMT) Tuesday night at the Bronovo Hospital in The Hague, according to a Royal House statement.