Oil field services provider Halliburton Co. in 2005 accepted no new contracts in Iran but honored existing agreements. By now it has completed all contractual commitments and is no longer working in the Middle Eastern country. 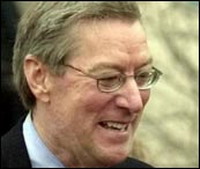 The company's announcement came on the same day Iranian President Mahmoud Ahmadinejad said his country was now capable of producing nuclear fuel on an "industrial scale," expanding a nuclear program that has drawn U.N. sanctions and condemnation from the West.

Dave Lesar, Halliburton's chairman and chief executive, said in January 2005 the company would wind down operations in Iran, which were done through a foreign-owned subsidiary. Lesar said at the time the services provided were legal, and the company reiterated the point Monday.

"Halliburton's prior business in Iran was clearly permissible under applicable laws and regulations," it said in a statement.

Still, a federal grand jury has looked into whether the company or its executives knowingly violated a U.S. ban on trade with Iran.

In a separate statement Monday, Halliburton said it was cooperating with the federal government's "ongoing investigation" of its business in Iran. Since responding to a grand jury subpoena seeking documents in the fall of 2004, the company said it has had no further inquiries from the Justice Department.

Lesar has characterized the Iranian contracts as "minuscule" compared with its other work, the bulk of which entails providing equipment and services to companies exploring for and producing oil and natural gas.

Halliburton said last month Lesar would move to a new corporate headquarters in Dubai to oversee Halliburton's intensified focus on business in the Mideast and energy-hungry Asia.

Lautenberg has said some American companies have exploited a loophole in the law by creating foreign subsidiaries that are incorporated overseas for the specific purpose of bypassing U.S. sanctions. He cites Halliburton as an example.

"Halliburton had to be dragged kicking and screaming out of Iran," Lautenberg said Monday. "If Halliburton wasn't pressured by Congress, they would still be doing business in Iran."

Already, Halliburton and its KBR Inc. division have been lightning rods for criticism because of KBR's more than $19 billion (14.21 billion EUR) in Pentagon contracts to be the sole provider of food and shelter services to the military in Iraq and Afghanistan. Democrats in Congress have claimed KBR benefited from ties to Vice President Dick Cheney, who once led Halliburton.

Halliburton is nearing completion of a stock-swap program that will separate itself from KBR, leaving two independent companies.