Tony Blair's wife has arrived in Bermuda to help the family of a slain Canadian teenager to reopen the case against two men suspected in her rape and murder more than a decade ago. 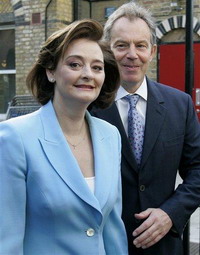 Cherie Booth, a human rights lawyer, arrived Saturday, according to a government official in London who spoke on condition of anonymity Sunday because Downing Street has not released details of Booth's itinerary. She is staying at the home of a friend, Bermudian lawyer Justin Williams.

At a Supreme Court hearing beginning April 16, Booth will represent the family of Rebecca Middleton, a 17-year-old from Belleville, Ontario, whose naked body was found in the British territory in July 1996. She had been stabbed to death.

Justis Raham Smith was acquitted in 1998 of killing Middleton, while Kirk Orlando Mundy pleaded guilty to accessory to the crime in 1996 and received a five-year prison sentence.

Rebecca's family sought the judicial review after Bermuda's top prosecutor, Vinette Graham-Allen, decided last year not to consider new charges against the two men. Booth is expected to ask the court to have prosecutors re-examine the evidence in the case.

Williams, a magistrate and commercial litigation lawyer, will host Booth at his residence in Tucker's Town, a wealthy enclave on the eastern end of the main island.