U.S. Secretary of State Condoleezza Rice said she isn't ready to attempt a "big bang" for Middle East peace, but she is assembling a plan to bring Israelis and Palestinians closer to that goal. 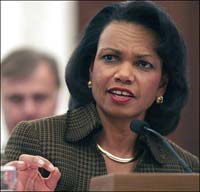 Rice was expected on Monday to announce a program for more substantive discussions of the most difficult issues that divide Israel and the Palestinians, including borders of an eventual Palestinian state and ways to ensure each state is secure.

"My approach has been, I admit, careful," Rice said Sunday, because too many past efforts failed despite what seemed to be clear objectives. "It's been step by step. I have not been willing to try for the big bang."

Rice is midway through a shuttle diplomacy mission that evokes previous failed attempts to pull together Israelis and the Palestinians. It is her fourth trip to the region in as many months.

Rice was traveling to Jordan on Monday for talks with King Abdullah. Palestinian refugees and their descendants make up more than half of Jordan's population, and Jordan is one of only two Arab nations, after Egypt, to make peace with Israel.

Rice's meetings in Jordan are part of an effort to enlist greater Arab support for any revived peace program with Israel.

For several months, Rice tried to put substance to the goal outlined by U.S. President George W. Bush four years ago of an eventual independent Palestinian state. On this trip, Rice says she is developing a common set of questions that both sides can use for discussions with her or on their own.

"If you're going to talk about a political horizon, you have to know what's blocking the horizon," Rice told reporters Sunday.

Rice's mission follows the formation of a coalition government that has Western-backed Palestinian moderates governing alongside Hamas militants. Her visit was also timed before a critical Arab League summit later this week in Saudi Arabia.

Rice wants Arab states to reissue a broad 2002 land-for-peace offer to Israel, and be willing to negotiate with the Jewish state. Some version of the plan is expected to be part of the upcoming summit in Riyadh.

The 2002 version offered Israel normal relations with all 23 Arab League member countries for returning to borders Israel occupied before the 1967 war.

"I've had very good discussions with the Arab leaders and I have a sense they understand and want to exercise their responsibilities for moving forward for peace," she said Sunday. "And I don't know how they will express it. But this is a time when it seems