Disgraced South Korean scientist Hwang Woo-suk testified Tuesday that he did not order the falsification of stem cell research, and one of his former collaborators said he also had been unaware of the fake data. 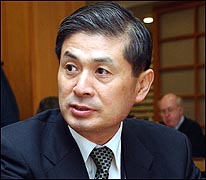 Hwang was once hailed as a stem cell pioneer and treated as a national hero but was discredited last year after revelations of ethics lapses that led to his admission that evidence was falsified for some of his academic papers.

However, Hwang has insisted the data were faked by junior researchers who deceived him into believing the results were real.

"I acknowledge moral responsibility as I was in overall charge" of the research, Hwang said Tuesday in his trial for alleged misappropriation of public and private funds used for his falsified stem cell research.

The courtroom was packed with spectators, including some 15 Buddhist monks who support Hwang.

Moon Shin-yong, one of the co-authors of Hwang's 2004 and 2005 papers published in international journals, testified that he was unaware of the fabrication of the stem cell research at that time and said he had unlimited trust in Hwang.

"If I had known that, I would have taken issue with" the fabrication, the obstetrics and gynecology professor said, expressing regret for offering false hopes to millions of patients suffering from debilitating diseases such as Alzheimer's and Parkinson's that experts believe could be helped with treatments developed with stem cells.

Stem cells are basic human cells that can develop into nearly any kind of tissue. Creating patient-specific stem cells with a patient's own DNA would be a key breakthrough because they theoretically could be used to grow replacement cells with the assurance that they would not be rejected by the body.

Hwang is accused of accepting 2 billion won (US$2.1 million; EUR 1.6 million) in private donations based on the outcome of the falsified research, and of embezzling about 800 million won (US$850,000; EUR 638,000) in private and government research funds. If convicted, he faces at least three years in prison.

Hearings in Hwang's trial, which began last year, have been held sporadically. It is not known when a verdict is expected.