A leading opera house said it has canceled a controversial production from its fall season, citing authorities' fears it posed undue security risks because it featured the severed heads of Buddha, Jesus and Muhammad. 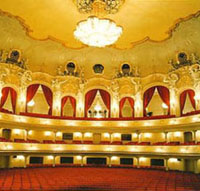 In a statement released late Monday, the Deutsche Oper said it had decided "with great regret" to cancel a planned production of Mozart's "Idomeneo" from its fall season, after Berlin security officials warned of an "incalculable risk" due to scenes dealing with Islam, as well as other religions.

After its premiere in 2003, the production by Hans Neuenfels drew widespread criticism over the scene in which King Idomeneo presents the severed heads, not only of Poseidon, but of Jesus, Buddha and Muhammad.

"We know the consequences of the conflict over the (Muhammad) caricatures," the opera house said in a statement. "We believe that needs to be taken very seriously and hope for your support."

"That is crazy," said Schaeuble told reporters. "This is unacceptable."