Sydney Swans wingman Adam Goodes won his second Brownlow Medal in Australian Rules football on Monday, taking the sport's top individual award for being the best and fairest player in 2006. 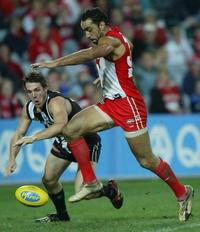 Goodes, who did not receive a vote in the first five rounds of the Australian Football League season, polled 26 in the remaining 17 rounds, including seven three-vote games for best on ground honors in voting by media and game officials.

Western Bulldogs' veteran Scott West was the runner-up with 23 votes, the second time he has finished second and his fifth top-four finish in his 14-season career.

Goodes, 26, also won the 2003 Brownlow Medal, sharing the award that year with Collingwood captain Nathan Buckley and Adelaide's Mark Ricciuto. The win also made Goodes the first indigenous football player to win the Brownlow more than once, reports AP.

He has the chance to become the 12th player in league history to win a Brownlow and be a member of a grand final championship team in the same season. The Swans takes on the West Coast Eagles in the league final on Saturday.

The Brownlow Medal has been awarded since 1924.