The military beefed up security outside the barricaded home of Suu Kyi, leader of the National League for Democracy and the 1991 Nobel Peace Prize laureate. She has spent 10 of the last 17 years in confinement, making her one of the world's most prominent political prisoners. 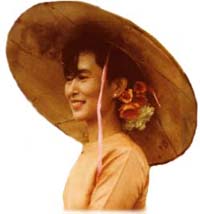 Her birthday was marked around the world by supporters, who oppose the ruling junta for its human rights abuses and failure to hand over power to a democratically elected government, the AP reports.

In neighboring Thailand, Myanmar exiles held a small Buddhist religious ceremony in Bangkok, while in the Philippines, activists wearing chains and carrying a replica of a giant cake marched to the Myanmar Embassy to demand Suu Kyi's release, the AP reports.

In her homeland, Suu Kyi's political party celebrated her birthday at its headquarters, several kilometers (miles) from her home. They released nine doves into the sky along with hundreds of colored balloons with letters attached calling for her freedom.