Spain’s team has to miss daily siesta because of World Cup opener against Ukraine on Wednesday. Team officials are not taking any chances, and have ordered the players to change their late habits so they can perform at a maximum during the game in Leipzig. 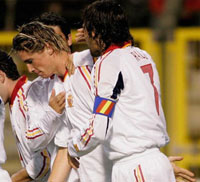 "To play at 3 is complicated," Spain midfielder Luis Garcia said Saturday. "I had to get used to it when I went to England, and it's a bit difficult to be awake at the time when we normally have our siesta."

In the days ahead of the game, the team will have only one training session at 3 p.m. instead of the morning and evening sessions it has had so far. Players will also sit down for an early lunch so they don't suffer indigestion during the game.

"In the beginning it's a bit strange. To eat a bowl of pasta at 11 in the morning, it's not easy," Garcia said.

However, he said a few days of preparation should be enough to get the team in the right rhythm ahead of the match, reports the AP.