Sue Wilkinson and Celia Kitzinger continue attempts to recognize their same-sex marriage. Their marriage in 2203 year recognized in Canada , but not in Britain . They want Britain 's High Court to give their marriage legal recognition. 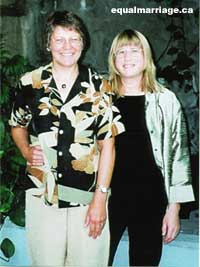 "The petitioner and her wife do not seek a special new form of recognition. They seek only recognition of their lawful marriage marriage being a universally socially understood institution," their lawyer Karon Monaghan said. "They have modest aspirations, and that is simply that their marriage is recognized the same way as everyone else's." The hearing is expected to last three days, with a decision expected in July.

Last year, Britain enacted the Civil Partnerships Bill giving same-sex couples the right to form legally binding partnerships and entitling them to most of the same tax and pension rights married couples possess. Wilkinson and Kitzinger's union has been termed a civil partnership.

"Our experience of marriage is that it's a lot more than just a word," Kitzinger told The Associated Press before the hearing. "We're not going to gain any more protections or rights, as far as we know. Since that's the case, why this fierce opposition? Our government's reaction is that they think it's more than just a word, otherwise they wouldn't oppose us."

A government spokeswoman said that when the bill was being drafted, Parliament decided that civil partnerships were not marriages, "but (couples) get the same rights as those that are married."

"Parliament decided it's a new relationship, new in law. Parliament took the view that it isn't marriage, but that they have those rights," she said on condition of anonymity, in line with government policy, reports the AP.